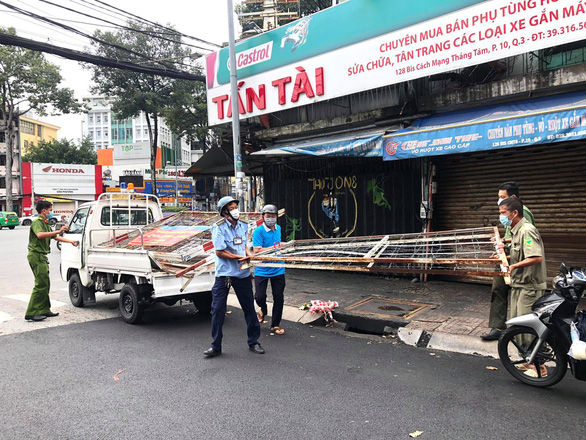 Functional forces have removed more COVID-19 checkpoints and barricades from many streets across Ho Chi Minh City after abolishing hundreds of others on alleyways earlier this week -- a signal for the beginning of a ‘new normal’ in the biggest Vietnamese city.

Authorities in all districts and Thu Duc City accelerated the removal on Thursday morning as per an order of the municipal administration.

Iron wires, tables, chairs, and scaffolding no longer obstructed commuters on many streets in District 1 and District 3, including Dien Bien Phu, Mai Thi Luu, Hoang Sa, and Nguyen Phuc Nguyen Streets, at around 11:15 am on Thursday, according to the observation of Tuoi Tre (Youth) newspaper.

The operations of COVID-19 checkpoints on other streets have also been suspended and pending their abolition.

Tran Quoc Hung, chairman of Linh Trung Ward in Thu Duc City, said that local functional forces have removed 36 out of 39 checkpoints on streets and alleys in the ward, leaving only three which border the neighboring province of Binh Duong in operation.

The same move was taken in Binh Thanh District on Thursday morning.

Local residents have expressed joy over the checkpoint removal.

“I’m happy to hear this news,” said Dao Le Cung, a resident of Binh Tho Ward in Thu Duc City.

“It removed our stress.”

“Even though I’m old with little mobility, I feel more comfortable this way,” said Le Thi Tam, a resident of the city.

Authorities in Ho Chi Minh City previously installed COVID-19 checkpoints and barricades, using as many kinds of objects as possible to create obstacles, in order to ensure local residents’ compliance with travel restrictions and the shelter-in-place mandate.

The clearance of these obstacles came as Ho Chi Minh City is set to start relaxing its coronavirus curbs, allowing more business and social activities after four months of lockdown and restoring some normalcy while coexisting with the virus starting October 1.

Functional forces began removing COVID-19 barricades from hundreds of alleys across the southern city on Monday.

However, the 12 checkpoints at the city’s entrances and 39 others in areas bordering nearby provinces will remain active to ensure safety for the key southern economic region in general.

A business hub of about nine million people, Ho Chi Minh City has been the epicenter of the coronavirus crisis that has hit Vietnam since late April, with more than 380,000 local infections and over 14,600 deaths.

Those figures account for half of the country’s total 779,398 patients and about 77 percent of its 19,098 fatalities, as recorded since the COVID-19 pandemic first appeared early last year.

So far, health workers have administered over 6.8 million first vaccine doses and more than 3.3 million second shots to residents aged from 18 years old in the city, according to the national COVID-19 vaccinational portal.