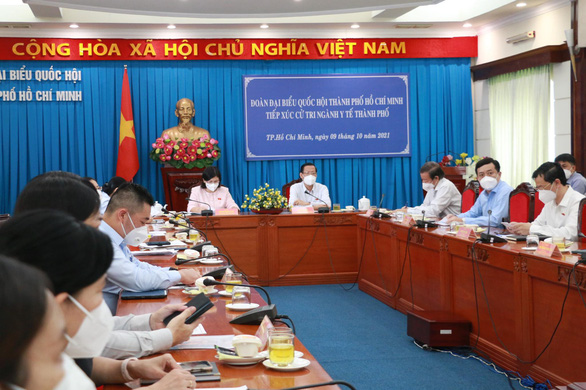 Children aged 12-17 in Vietnam to get vaccinated against COVID-19 this month: Ministry of Health

Vietnam is devising the guidelines for a COVID-19 vaccination drive benefitting children from 12 to 17 years old, which is slated for implementation in October, said Tran Van Thuan, Deputy Minister of Health, on Saturday.

Since the COVID-19 pathogen emerged in Vietnam in early 2020, some 20,000 domestic children have been infected, said Assoc. Prof., Dr. Nguyen Thanh Hung, director of the Children’s Hospital No. 1 in Ho Chi Minh City, during the event.

Despite posing lower risks to children than it does to adults, COVID-19 still proves a major threat to the health conditions of youths with obesity or underlying conditions.

The epidemic’s peril on children has become a major concern of the public, specifically when Ho Chi Minh City announced its plan to welcome students back to K-12 schools in January 2022, Hung pointed out.

The doctor cited lessons from the United States, where 500,000 children were infected with the coronavirus in the last two weeks of September after in-person classes were relaunched.

The U.S. has so far recorded 5.9 million COVID-19 infections among children, or 17 percent of the national caseload.

He referred to Vietnam’s child population of 25 million, of which 1.8 million are from Ho Chi Minh City.

“Once the adults are vaccinated, the infection risks will shift to children,” Hung pointed out.

“Although the death rate of COVID-19 among children is lower, the long-term consequences that COVID-19 poses on the mental and physical health of children have yet to be measured.”

According to Hung, the U.S. has started vaccinating children aged 12-18 years old, while they are also testing Pfizer jabs on kids between five and 11 years old.

In the meantime, Cuba has approved and is rolling out their homegrown jab Abdala to children above two years of age.

Abdala has also been approved by Vietnamese authorities, who signed a deal to purchase 10 million doses of the vaccine from the Caribbean country.

On top of that, Vietnam is also expecting Pfizer shipments to arrive in the next months, which affirms the feasibility of a child vaccination drive in the country.

“On behalf of parents and medical practitioners, I would like to ask the country’s President and the Ho Chi Minh City National Assembly delegation to give support for a vaccination drive for children, making it be included in the national COVID-19 vaccination program,” Hung said at the meeting.

Responding to the proposal, Deputy Minister of Health Tran Van Thuan said the health ministry is devising guidelines to start vaccinating children aged 12-17 in October before expanding the program to children of lower ages.

With the upcoming vaccine shipments from the U.S.-based manufacturer Pfizer, as well as the signed purchase deal for Abdala jabs from Cuba, Vietnam is expecting to receive a total of 120 million COVID-19 vaccine doses by the end of 2021.

The Southeast Asian country is looking to provide vaccine coverage to at least 70 percent of the adult population by the end of the year.