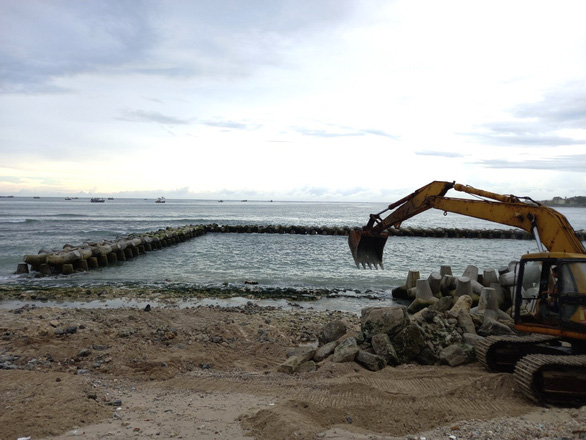 Ly Son Island District in Vietnam's Quang Ngai Province has allotted a section of its beach to a saltwater swimming pool project, which received VND5 billion (US$220,000) in investment.

The project was confirmed by Nguyen Quoc Viet, secretary of the Ly Son Party Committee, during an interview with Tuoi Tre (Youth) newspaper on Tuesday.

The pool was approved for both civilian and military use, according to Viet.

It will be primarily utilized for military and rescue training, but it will also be opened to the public and tourists during downtime in the army’s schedule.

Spanning 60 meters in length and 35 meters in width, the project has received funding amounting to VND5 billion from the local government’s budget.

The Ly Son District Military Command was appointed as the investor for the project and will have the right to use it as a training site for rescue missions in the future.

Contractors commenced construction on August 2 to meet the completion deadline of December 31.

They are using concrete pillars to delineate the pool from the ocean and deter wind and sea forces.

However, the gaps between these currents will still allow sea currents to enter the pool.

“Ly Son is home to many places of interest and natural wonders, including a pool on top of an inactive volcano,” said Viet.

“The inauguration of the ocean-fed pool will benefit both civilian and military use, as well as bringing tourists to the area and fostering the local economy.”