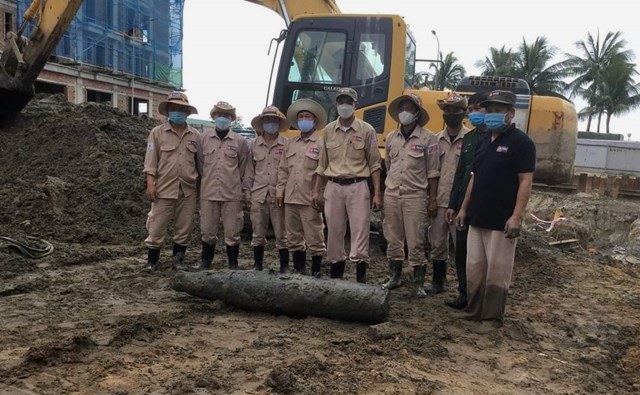 An unexploded bomb weighing 230 kilograms has been found at a construction site located right next to the largest market in Quang Binh Province, north-central Vietnam.

The Mines Advisory Group (MAG), a humanitarian non-government organization that helps clear explosive remnants of war, confirmed on Monday that their mine clearance team in Quang Binh had successfully removed a 230-kilogram bomb from the construction site of a multi-story building.

The team carried out the work after receiving the information from the Quang Binh Military Command.

The information showed that the bomb was discovered at a construction site located next to Dong Hoi Market in the namesake city earlier the same day.

Dong Hoi is the largest market in Quang Binh Province, which has hundreds of merchants and is visited by thousands of local residents on a daily basis.

The explosive was found as the workers were using an excavator to dig a foundation for the building.

The construction unit has planted about 90 piles filled with reinforced concrete around the location where the bomb was discovered as part of their work over the past days.

None of the piles hit the bomb, however.

The mine clearance team believed that the bomb, which still has the detonator, has been here since the American war in Vietnam.

The team is expected to coordinate the detonation of the explosive in the next few days.