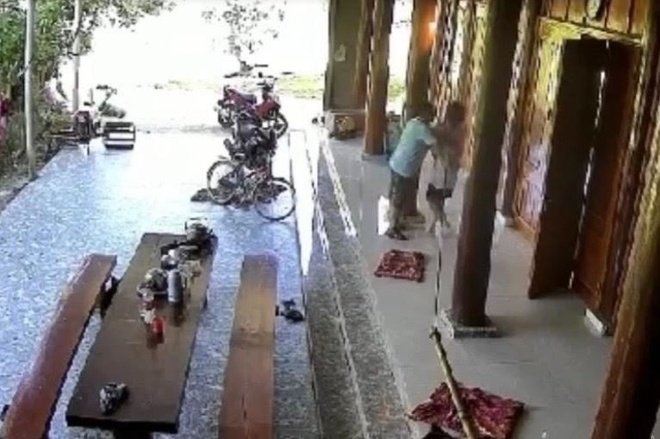 The chairman of the commune-level Vietnam Fatherland Front Committee in Thanh Hoa Province, north-central Vietnam has been suspended from work after being accused of groping a tenth grader.

Competent authorities have reviewed and verified the video footage that appeared to show Toi groping the schoolgirl, Do Xuan Nam, Party chief of Thuong Xuan District, confirmed on Monday.

As the Vietnam Fatherland Front Committee chapter in Xuan Thang Commune does not have a vice-chairman, the commune's deputy Party secretary will take over from Toi during this period.

At around 4:20 pm on June 28, a man was caught on CCTV walking into the yard of a local house and talking to L.T., a tenth grader who lives at the residence.

The man then approaches the young girl and touches her shoulder and back.

After a few moments, he grabs T. and tries to kiss her, before she resists and pushes him away.

After looking at the video clip, T.’s family members believed that the man in the footage is Toi, thus they filed a denunciation to the authorities of Thuong Xuan District.