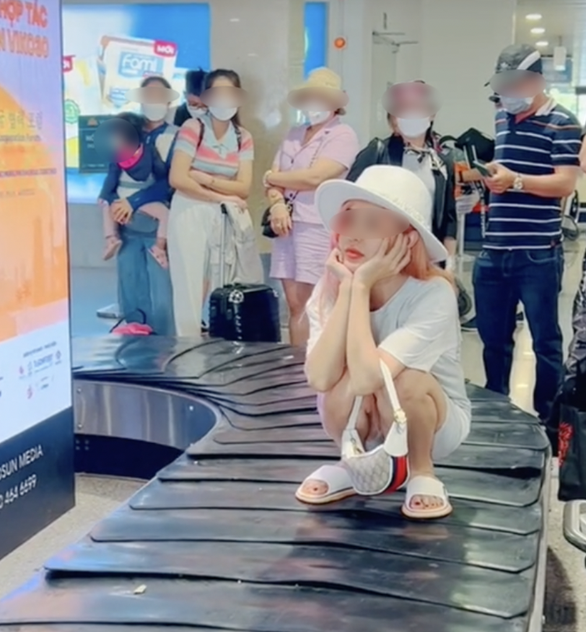 The Civil Aviation Authority of Vietnam (CAAV) has launched an investigation into a TikTok video in which a woman is seen posing for social media content while sitting on a baggage carousel at Ho Chi Minh City’s Tan Son Nhat International Airport.

The video, circulated online on Friday, shows a woman posing for her social media content while sitting on a conveyor belt whereas other passgengers are waiting to take their belongings.

The footage went viral on the internet, receiving a lot of backlash from netizens.

The woman’s action in the footage deliberately violated regulations on security and safety at the airport, director of the Civil Aviation Authority of Vietnam (CAAV) Dinh Viet Thang told Tuoi Tre (Youth) newspaper.

“Some passengers violate the rules by accident or do not realize that what they are doing is against the law,” Thang explained.

“However, using the baggage carousel as a shooting location is a planned activity.

“An intentional violation of the ban of sitting on the conveyor belt may result in a flight ban imposed on the violator.”

Thang also requested that the relevant units verify the time when the woman sat on the conveyor belt and recorded the video in order to take proper legal actions.

Later on the same day, according to the Southern Airport Authority, the management board of the airport started verifying the place and timing of the woman’s unsafe actions.

A representative from a carrier told Tuoi Tre that this act poses a threat to airport personnel and damages airport equipment.

Additionally, the conveyor belt is utilized to transport luggage, with a system of machinery and equipment beneath.

In case of an accident, the consequences will be severe, not to mention damages to the airport's equipment.

Previously, a lot of youngsters have faced criticism from netizens for engaging in risky activities at airports while producing social media content.