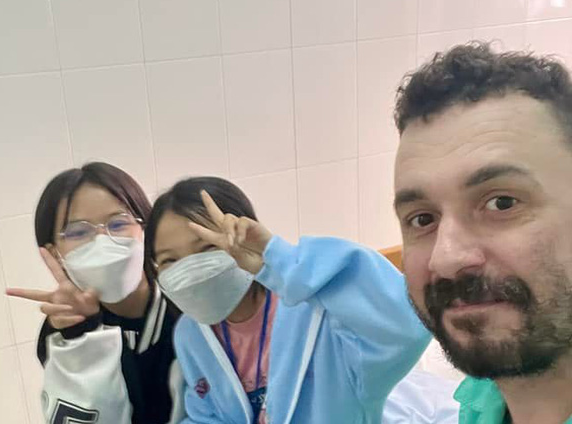 Many Vietnamese people have donated money to a 39-year-old Russian man in south-central Khanh Hoa Province who is unable to afford the surgery for his femoral neck fracture.

Roman Borodachev, 39, a Russian national living in Nha Trang City, Khanh Hoa Province, suffered a femoral neck fracture after a fall about two months ago but could not afford a surgery due to unstable income and the lack of health insurance.

Anna Los, another Russian citizen in Nha Trang, sent a letter to Tuoi Tre (Youth) newspaper on Friday to seek help for Borodachev.

According to Los, Borodachev fell on the bathroom floor and broke his hip on June 12.

The Russian man was then taken to the hospital, with doctors concluding that he would need to undergo a surgery.

As the surgical operation is too costly and Borodachev does not have a health insurance policy, he decided to try other alternatives, but none seemed to be effective.

Los said she had also sent letters to the Russian Consulate General in Ho Chi Minh and the Khanh Hoa Department of Foreign Affairs to ask for assistance.

“I am an engineer, and the COVID-19 pandemic in the past two years has caused my income to drop significantly.”

Borodachev does not have any relatives in Russia, he said, adding that his parents had passed away.

An official of Khanh Hoa General Hospital confirmed that the Russian man was admitted to the infirmary on July 30.

He was diagnosed with a fracture of the left femoral neck, loss of function of the left hip joint, and atrophy of the left thigh muscle.

The patient is in stable health but requires a femoral neck replacement surgery.

After hearing about Borodachev’s story, many Vietnamese citizens have decided to offer their help, with donations having totaled VND30 million ($1,280) so far.

Kim Dinh, who works at a pharmacy in Nha Trang, said a foreign friend told her about Borodachev’s condition.

“Hopefully he will soon undergo the surgery.”

Borodachev said he has received a lot of phone calls and encouragement after his story was shared in some groups on social media.

“I am very happy to know that many people are by my side and appreciate the love from my Vietnamese friends,” he said.