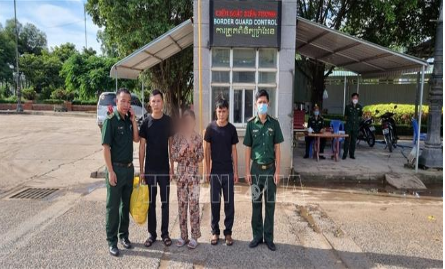 Border guards in Vietnam’s Central Highlands province of Kon Tum, in conjunction with Cambodian authorities, rescued a local girl who had been trafficked into the neighboring country as a forced worker in a human trafficking scam in April.

Y.L., 16, was saved on Saturday last week, around four months after she was sold to Cambodia, the Vietnam News Agency cited the provincial Border Guard Command as reporting a day later.

The young girl was held by five Cambodian companies as a forced laborer who re-sold her repeatedly from one to another before being rescued, local border guards said.

Local authorities carried out procedures to send the teen girl to her family in the province’s Ngoc Hoi District, while hunting for the man who cheated L. into going to Cambodia to get ‘an easy job with high pay,’ before selling her as a coerced worker.

L. told the police that the man scammed L. after he got acquainted with her through his Facebook page named ‘Le Ngoc Nhat’ when she was working at a shoe company in Binh Duong Province, just outside Ho Chi Minh City.

On April 18, the man took her and five others, including two females and three males, to the Mekong Delta province of Long An and they went to Cambodia through a border trail, the girl narrated.

When they arrived in the neighboring country, the man sold L. to a company for US$1,800 and then cut all contact with her.

Meanwhile, her five companions got jobs at different places and she has since had no communication with them, L. said.

As she could not bear the excessive work, L. asked the company to allow her to return to Vietnam, but the employer forced her to pay $3,500 or lure three to five other Vietnamese to go to Cambodia to work for the company in exchange for her release.

L. could not meet either condition and she was re-sold later to another firm.

The resale of the girl took place repeatedly until she worked for the fifth company and managed to get in contact with her family, informing them of her situation, on July 17.

This company is located in a building in Preah Sihanouk Province, around 470km from the Moc Bai border gate in Vietnam’s southwestern Tay Ninh Province.

After receiving a report from L.’s family about the human trafficking scam, Kon Tum border guards coordinated with its Tay Ninh counterparts and Cambodia’s competent agencies to launch a plan to rescue her.

Local border guards said this was the first time that they had successfully handled a human trafficking case in Kon Tum.