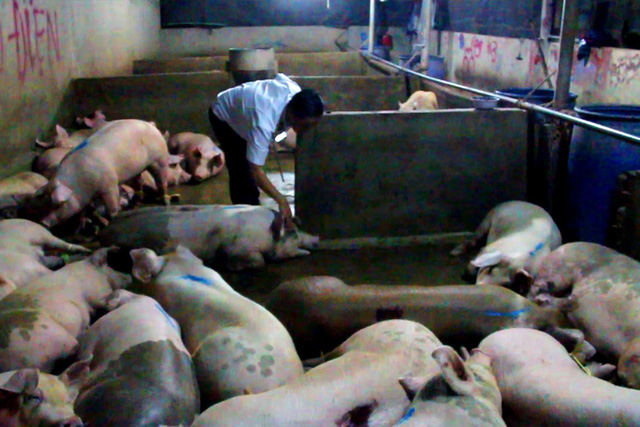 Scores of pigs with sedatives found in southern Vietnam

A pig farm in one of southern Vietnam’s primary pork-producing hubs has been found to force water into its livestock to fatten up the pigs before butchering and suspected of injecting them with tranquilizers.

Police in Dong Nai Province caught the staff of a pig farm in Bien Hoa, the province’s capital city, pumping water into 79 pigs through tubes forced directly into the animals’ stomachs on the evening of March 20.

Such practices are typically done to increase the weight of the livestock before butchering.

When local authorities arrived on the scene, the pigs were lying on the floor of the pigsty, many of them too fat and exhausted to rise to their feet.

Authorities also identified several syringes and bottles of tranquilizers on the farm.

The pigs were sold by a company in Dong Nai and were being prepared for transfer to a slaughterhouse in the neighboring province of Long An, according to an official from the Dong Nai veterinary department.

The piggery’s owner admitted to pumping the animals full of water but rejected accusations of injecting the hogs with sedatives.

Authorities are still examining the hogs for signs of the drug.

Injecting swine with tranquilizers is not without precedent.

All these animals were destroyed as a result.