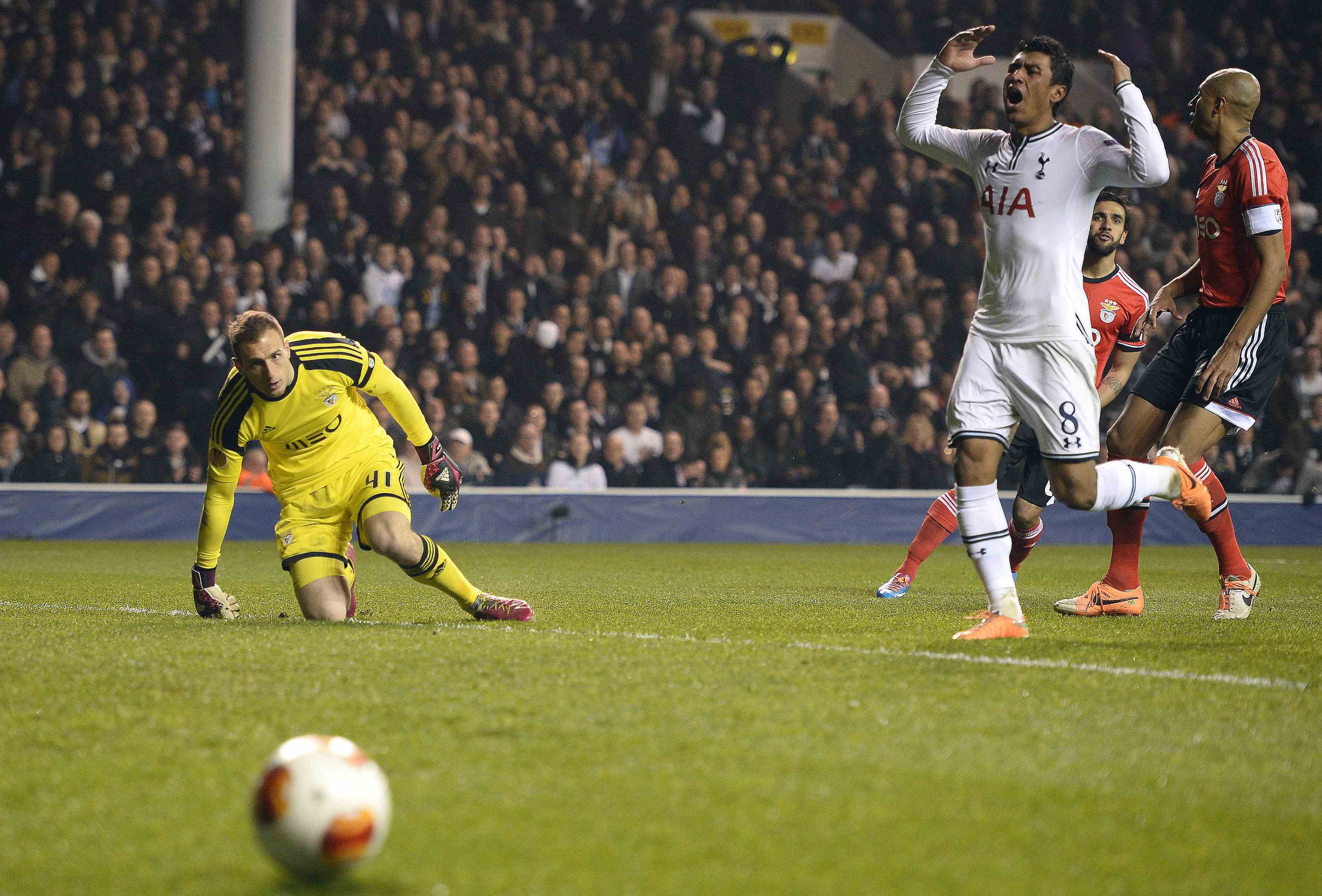 Mario Gomez dusted off his shooting boots to put Fiorentina in the driving seat with a 1-1 Europa League draw at Juventus while Benfica were too good forTottenham Hotspur, winning their last-16 first leg 3-1 away on Thursday. Germany striker Gomez had not scored since returning in February after five months out with a knee injury but tilted the tie in his team's favour with a 79th-minute strike while Real Betis tore up the form book to win 2-0 at local rivals Sevilla. Twice winners Porto beat Napoli 1-0 thanks to Jackson Martinez's superb finish and Helton's agile goalkeeping. Valencia played for more than an hour with 10 men but still beat Ludogorets 3-0 inBulgaria. The goals, however, dried up for the previous round's big scorers Salzburg who were held to a 0-0 draw at Basel, ending a run of 14 successive wins in all competitions.

Juventus's clash with Fiorentina was a replay of the 1990 UEFA Cup final and came four days after the two sides met in Serie A. Juventus, three places and 27 points clear of their domestic rivals, won 1-0 on Sunday and took the lead after three minutes when the ball fell kindly at the feet of Arturo Vidal and he dispatched it powerfully into the net from 10 metres. Yet their failure to kill off the tie gave hope to Fiorentina who grew in confidence and eventually punished their hosts late on. Gomez, who tore ligaments in his right knee in September, came off the bench in the 67th minute and made a decisive impact, controlling a lofted pass before shooting through the legs of Juventus keeper Gianluigi Buffon. Tottenham were hosting Benfica for the first time since they met in the European Cup semi-final in 1962.

Benfica, who are seven points clear at the top of the Portuguese championship, won that tie and were thoroughly on top when they went ahead after 30 minutes. Rodrigo raced onto a terrific throughball from Ruben Amorim and picked his spot, curling his finish with his in-step into the far corner. Tottenham manager Tim Sherwood told his squad they were playing for their futures after their 4-0 Premier League defeat to Chelsea at the weekend but the present looked bleak when Luisao headed home unmarked after 58 minutes. Christian Eriksen curled in a free kick to reduce the deficit but Luisao struck again, pouncing on a rebound to shoot into the roof of the net from close range. Tottenham defender Younes Kaboul refused to throw in the towel however. "Everything is possible in football," he told ITV. "We will go there to win and see what happens."Seville derby The first Seville derby in Europe did not go according to the script as Sevilla, seventh in La Liga, suffered a shock home reverse against their struggling rivals who are bottom of the domestic table. Betis took the lead when Baptistao powered a header into the roof of the net after 15 minutes andSalvador Sevilla put the result beyond doubt in the 77th minute when he drove the ball into the far corner of the net. Porto's preparations for their tie against Napoli were undermined when they parted company with coach Paulo Fonseca last Wednesday, but they still looked a well-drilled unit against Rafa Benitez's tactically-wily Italian side. The Portuguese team survived an early second-half onslaught from Napoli thanks to the lithe reflexes of keeper Helton, who kept out a drilled shot on the turn from Gonzalo Higuain and blocked Raul Albiol's header from close range. Minutes later they went ahead when Martinez showed a fine scorer's instinct to drop off his marker at the far post and rifle a volley into the net from 15 metres. Bulgarians Ludogorets fell behind against a Valencia team unbeaten since matchday one of the group stage when Antonio Barragan fired a low drive into the bottom corner after five minutes. The Spanish side were reduced to 10 men 19 minutes later, however, when Seydou Keita was dismissed for bringing down Roman Bezjak, who spared the visitors a double punishment by fluffing the resulting penalty. Valencia made the most of the let-off when Fede Cartabia volleyed the ball low into the bottom corner after 33 minutes and Philippe Senderos grabbed his first goal for the club, heading home unmarked in the second half. Juninho Quixada was sent off for Ludogorets with 10 minutes remaining for kicking out. Salzburg were fresh from a 6-1 aggregate success over Ajax Amsterdam in the last 32 but found Basel a tougher nut to crack in Switzerland, with the Austrian side failing to score for the first time this season. Gueida Fofana scored twice as Olympique Lyon comfortably beat Viktoria Plzen 4-1 and AZ Alkmaar won 1-0 at home to Anzhi Makhachkala.