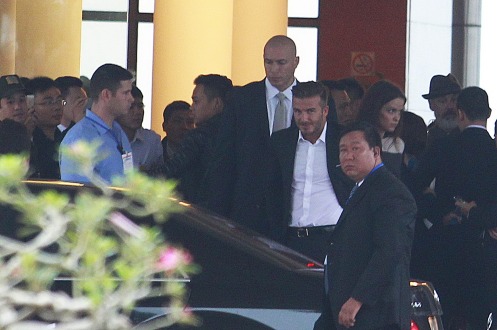 Eleven years after his first trip to Vietnam, former English midfielder David Beckham was still wholeheartedly welcomed by local fans as he landed at Hanoi on his return to the country on Monday.

The former Manchester United winger will be in Ho Chi Minh City today, November 11, after having a brief meeting with his supporters in the capital city shortly after arriving.

He will have an official media meeting in the southern metropolis, which is the main program of his two-day visit held as part of a Southeast Asian tour to endorse a beverage brand for which he is a representative, before leaving for Malaysia the same day.

In Hanoi, crowds of fans besieged the Sofitel Metropole Hotel, where the retired footballer stayed for one night, only to have a first-hand look at their iconic player, according to newswire VnExpress.

After a short rest at the hotel, the 39-year-old Englishman attended a dinner with high-profile Vietnamese businessmen on Ba Trieu Street, where he gave autographs and special souvenirs to 24 lucky fans, the newswire said.

The ex-midfielder said Vietnam is a special and impressive country among the places he has visited.

Beckham said he was happy to return to Vietnam after more than ten years.

His first Vietnam trip was in 2003, under a promotional event of an engine oil brand.

After the dinner Beckham headed to a bar on Ly Thuong Kiet Street, where hundreds of fans were waiting to see him.

“I read the newspaper and rushed here immediately,” Phuong My, a female supporter, told VnExpress.

Beckham made his first-team debut with Manchester United, where his professional career began, in 1992 at 17.

With United, Beckham won the Premier League title six times and the UEFA Champions League in 1999.

He then played four seasons with Real Madrid, winning the La Liga championship in his final season with the club.

In July 2007 Beckham, the first British footballer to play 100 Champions League games, signed a five-year contract with Major League Soccer club LA Galaxy, and spent two loan spells as a Galaxy player in Italy with Milan in 2009 and 2010.

He was first called up to the English national team in 1996, at the age of 21. He was England’s captain for six years, during which he played 58 matches.