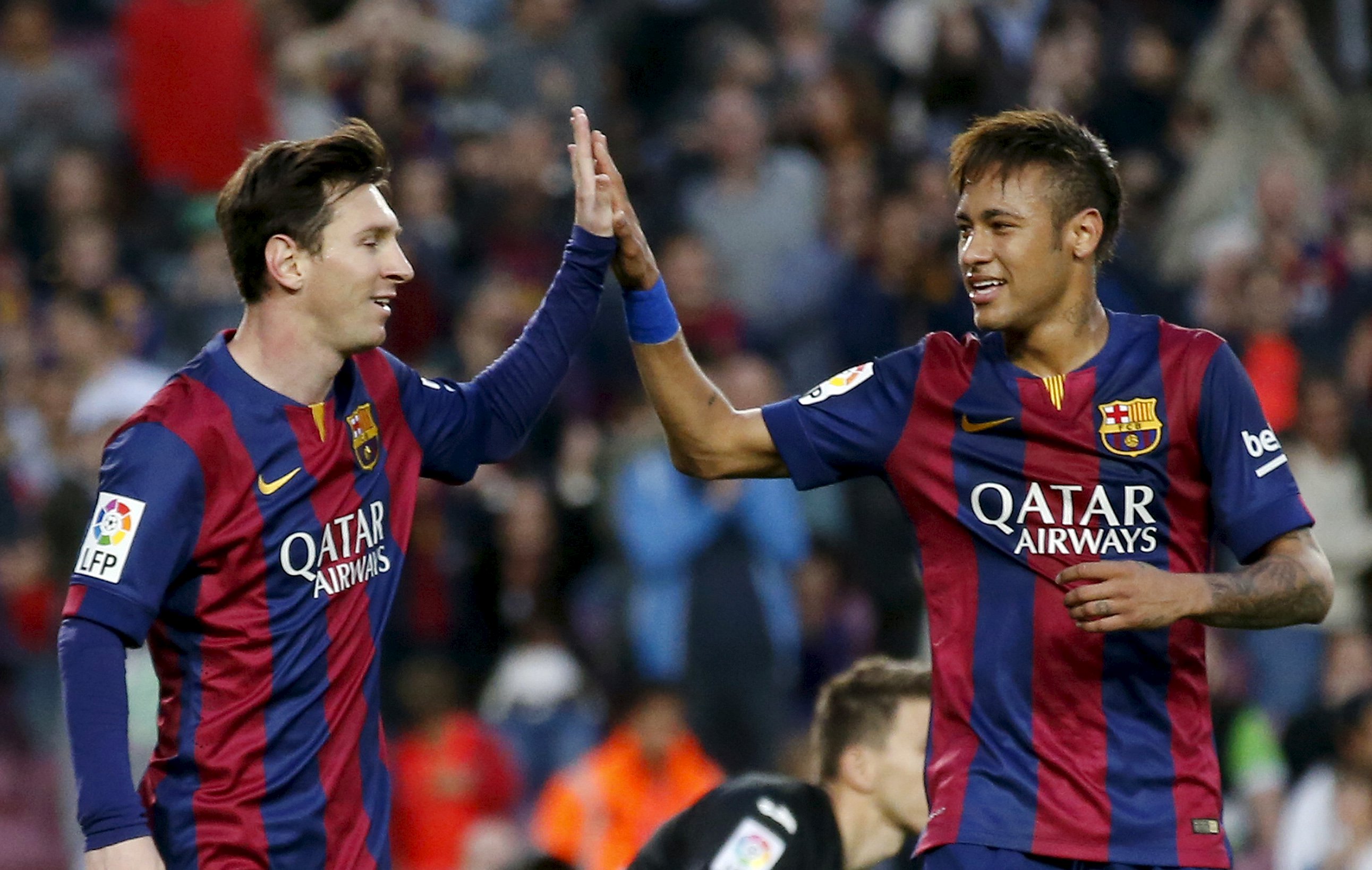 Barcelona's Lionel Messi, Luis Suarez and Neymarmotored past 100 goals for the season to fire the La Liga leaders to a 6-0 rout of Getafe that stretched the gap over Real Madrid to five points on Tuesday.

After Suarez was felled, Messi set treble-chasing Barca on their way with a dinked penalty in the ninth minute at the Nou Camp, the first time the Argentina forward has attempted a "Panenka" in 75 spot kicks for club and country.

Suarez clipped a volley into the net from Messi's floated pass in the 25th and Neymarweaved into space to fire low into the corner three minutes later, the 100th goal for Messi, Suarez and Neymar, known as 'MSN', in all competitions this term.

Messi is on 49 goals, Uruguay striker Suarez, whose ban for biting an opponent expired at the end of October, has 21 and Brazil forward Neymar 32.

Playmaker Xavi, making his 501st league appearance for the Catalan giants, curled a superb shot into the top corner on the half hour and Suarez netted his second after a flowing move five minutes before the break.

It was the first time Getafe, who are 13th, have conceded five goals in the first half of a La Liga match.

Messi took his league tally to 38 this term, one behind top scorer Cristiano Ronaldo of Real, with a whipped shot into the top corner two minutes after the break before Getafe managed to repel waves of attacks for the remainder of the game.

Barcelona have 84 points with four matches left, while second-placed Real can trim the gap back to two points if they win their game in hand at home to Almeria on Wednesday.

Champions Atletico Madrid are seven points adrift of Real in third ahead of their game at Villarreal on Wednesday.

Barcelona, and their formidable attack, look to be in ominous form before a crucial run of games over the next two weeks, including their Champions League semi-final tie against German champions Bayern Munich.

They are also through to next month's King's Cup final against Athletic Bilbao and thus have a chance of repeating 2009's historic treble of Champions League and Spanish league and Cup titles under current Bayern coach Pep Guardiola.

"The team is 100 percent committed, the fans, everyone," Suarez told Spanish television.

"We have an obligation to achieve great things and we are facing the most important phase of the season," added the 28-year-old, who joined Barca from Liverpool in July.

Bilbao missed a chance to climb above Malaga into seventh when they let slip a one-goal lead and were held to a 1-1 draw at home to 10-man Real Sociedad in the Basque derby.

Sociedad, who are 12th, had defender Mikel Gonzalez sent off when he conceded a penalty five minutes after halftime for a foul on Bilbao forward Aritz Aduriz.

Aduriz scored with the spot kick but Sociedad fullback Alberto De La Bella levelled with a powerful long-range strike into the top corner on the hour.

Bottom side Cordoba are on the brink of relegation after they were beaten 1-0 at fellow strugglers Levante. They are 11 points adrift of the safety zone with four games remaining.