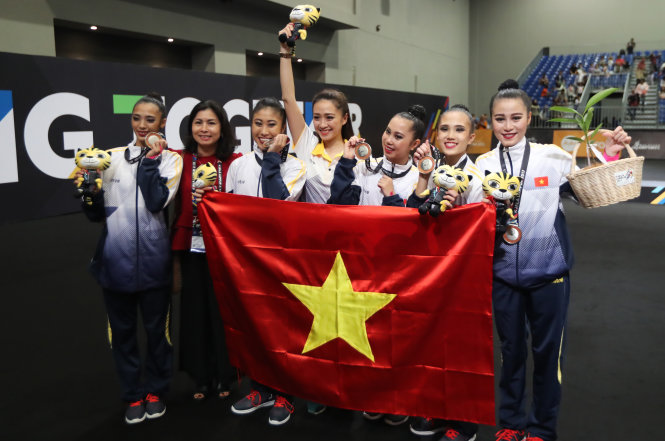 The weightlifter won a bronze medal in the men’s 85kg event, Vietnam’s only medal on the last day of official competition.

Vietnam wrapped up its SEA Games journey as the event’s second runner-up, with 58 gold, 50 silver and 60 bronze medals. Hosts Malaysia top the leader board with 145 golds, followed by Thailand, with 72 golds.

Vietnam’s target was to win between 49 and 59 gold medals and finish in the top three on the medal tally.

The third-place target seemed in jeopardy on Wednesday when Singapore snuck up behind them on the leader board, putting Vietnam ahead by only a single gold medal.

However, by the end of the final day, the Singaporeans failed to win an event and Vietnam had its third-place spot secured.

A closing ceremony was held on the final night to conclude the 11-day competition and its 404 events in 38 different sports.

Olympic sports are sports contested in the Summer and Winter Olympic Games. Vietnam has exerted effort to improve the performance of its athletes in such important sports as track-and-field and swimming.

“I don’t think we should care much about whether we finished third or fourth at SEA Games,” he told reporters in Malaysia.

“What’s more important is we have reaped many successes in several Olympic sports, such as swimming and track-and-field.”

“The Vietnamese track-and-field athletes had many emotional performances at the event,” Phan said.

The next SEA Games, the region’s biggest sporting competition, will be hosted by the Philippines in 2019.