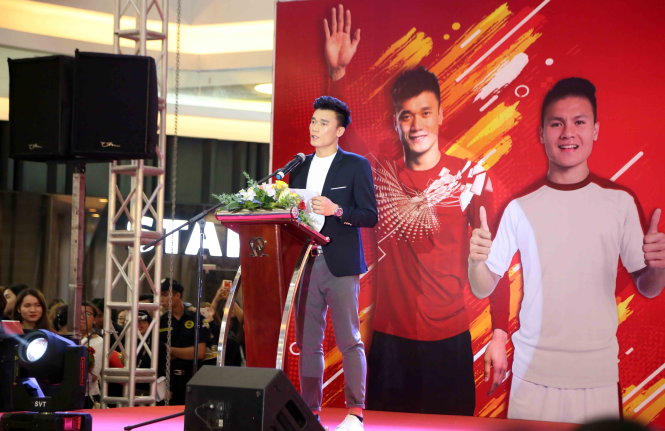 Two top players in Vietnam’s under-23 football squad that finished second in the 2018 AFC U23 Championship after a historic run in China have failed to perform well at club level, raising concerns Vietnam will not pull off a similar feat at the upcoming Asian Games in Indonesia.

The most disappointing performance belongs to star goalie Bui Tien Dung, who is playing for local football club FLC Thanh Hoa as a second substitute goalkeeper.

Dung, 21, only appeared in eight out of 20 matches the club have played so far in the top-division V-League 1 since the start of the 2018 season, as he is the club’s last option for the goalkeeping position.

Once hailed a rising star for his remarkable saves at the Asian championship, Dung did not live up to expectations playing for FLC Thanh Hoa as he repeatedly commited unforced errors during his rare appearances for the club.

“Vietnam’s unimaginable success at the 2018 AFC U23 Championship led many to believe that Bui Tien Dung is the best goalkeeper in the country, but experts are not so convinced judging from his club performance,” said Doan Minh Xuong, a football expert.

Dung is also criticized for being so occupied with shooting commercials and attending non-football events that he has no time left for practice.

The star goalie has become a household name since emerging as a hero from the Asian football competition, appearing in multiple TV commercials thanks to his good looks.

There has been rumor that Dung will not be Vietnam’s first-choice goalkeeper for the 2018 Asian Games, which will kick off in Indonesia on August 11.

South Korean coach Park Hang-seo has said he might reserve the top spot for Dang Van Lam, a Russian-Vietnamese goalkeeper who plays for V-League 1 side Hai Phong F.C., if Bui Tien Dung continues to display such poor performance.

Meanwhile, striker Nguyen Quang Hai, who ranked second for most goals scored in the U-23 tournament in China with five goals, only found the back of the net two times in the first 12 matches he played for V-League 1 club Hanoi F.C. this season.

Despite having recovered from the poor start with seven goals over the next eight league matches, Hai may make his coach think twice before including him in the starting lineup for matches at the upcoming Asian Games.

Like Dung, Hai is a name sought-after by advertisers after his breakout performance in China, where his ‘sensational’ freekick strike in the final against Uzbekistan won the fan-voted best goal award of the tournament.

The Dung - Hai duo are frequently seen at promotional events across the country, which they manage to squeeze into their tight practicing and playing schedule.

“It’s normal for famous football players to enter into many image use contracts, but players should bear in mind that they are only worth how well they perform on the field,” said football expert Doan Minh Xuong.