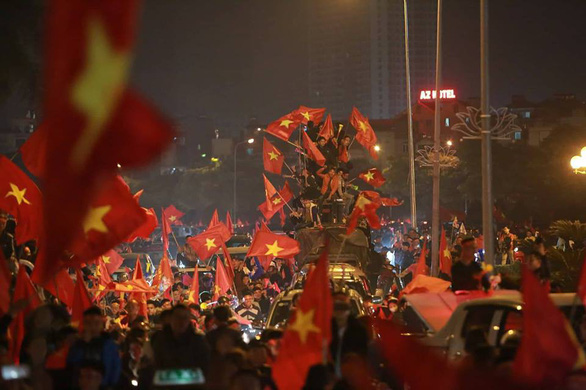 Football fever gripped Vietnam again on Saturday night as thousands of fans flocked to the streets of the capital Hanoi to celebrate their country’s victory over Malaysia in the ASEAN Football Federation (AFF) Championship final.

Nguyen Anh Duc’s sixth minute volley secured a first regional title since 2008 for Vietnam and after the final whistle the streets around the My Dinh Stadium were soon teeming with flag-waving fans.

The supporters lit flares, waved national flags, blew vuvuzelas and honked car horns in a party atmosphere, a rare sight in the Southeast Asian country but one seen three times this year after Vietnamese soccer success.

Similar celebrations occurred when Vietnam reached the final of the under-23 Asian Cup in January and again when they reached the semi-finals of the Asian Games tournament in August.

All three teams were coached by Park Hang-seo and his contribution was recognised by a number of South Korean flags carried by the revellers.

“We have so much to thank Mr Park Hang-seo for. Thank you Mr Park for bringing us this festive atmosphere and a success that the whole nation have been waiting for. Really, thank you, Mr Park Hang Seo.”

The feeling of affection is clearly mutual for the man some Vietnamese have dubbed the “wizard”.

“We got a lot of love from the Vietnamese people,” Park said in the post-match press conference.

“I really appreciate them and their amazing support. It really is an honour for me to receive that kind of huge support and love.”

Malaysia needed to score to have any hope of winning the title after a 2-2 draw in the opening leg in Kuala Lumpur on Tuesday.

“It’s an amazing journey for these players. They’ve been playing very, very well for us to come to this level,” said coach Tan Cheng Hoe.

“For me personally, I feel that the players did their best but we need to move to the next level, keep on the way we are playing, I think we will have a good future.”

Malaysia failed to qualify for the next big tournament on the Asian soccer calendar but Park’s side will be in the United Arab Emirates next month for the Asian Cup.

Vietnam, who have been drawn to face Iran, Iraq and Yemen in the opening round, have played at the finals of the continental championships just once since unification, reaching the quarter-finals as co-hosts in 2007.