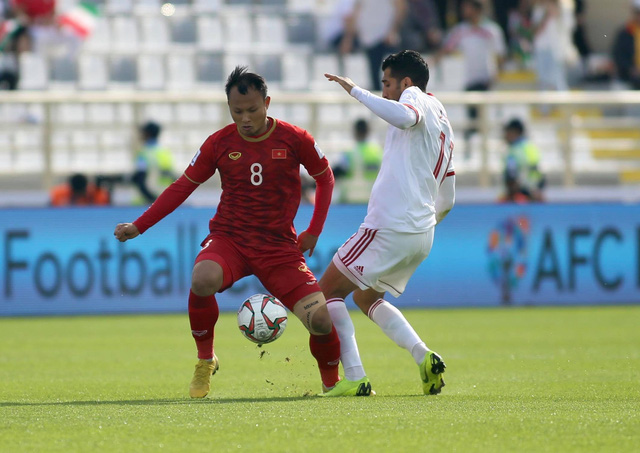 Vietnam played a hard-fought game during their second Group D match at the ongoing 2019 Asian Cup against Iran in the UAE on Saturday night, managing to keep their hope of advancing into the knockout stage alive despite a 2-0 defeat.

Two goals from Azmoun in the 38th and 69th minutes guaranteed the convincing victory for Iran over Vietnam, strengthening Team Melli’s position on the top of Group D.

Meanwhile, with one round of group-stage matches to play next week, Vietnam must now beat Yemen in their final Group D game on January 16 to stand any chance of sealing their place in the knockout phase as one of the best third-place finishers.

The recently-crowned AFF Cup champions promised before Saturday’s game that having the youngest squads in the 2019 Asian Cup would not stop them from giving Iran a tough fight, which they really did.

The Golden Stars shared an enjoyable possession of 44 percent in the opening moments.

Vietnam’s goalkeeper Dang Van Lam denied a number of fine shots from Iran while his teammates tried their best to repel the fierce components, though the Southeast Asian side were unable to launch a cohesive attack of their own.

The most inevitable breakthrough came on the 38th minutes when Iran’s Azmoun rose highest to head home a pinpoint cross and send his side into the half-time with a slender lead.

Despite their first half woes, Vietnam began the second period brightly, and they could have equalize in the 52nd minute when substitute Nguyen Van Toan’s pass found Nguyen Cong Phuong, whose shot from 11 meters was skillfully saved by goalie Alireza Beiranvand.

Iran succeeded in their bid to widen the lead in the 69th minute, when Azmoun neatly gathered a pass from Mahdi Torabi and fired past Van Lam to extend his side’s advantage.

In the 89th minute, Nguyen Quang Hai curled a late effort to narrow the difference for Vietnam but it was only off target.

The 2-0 win enables the Iranians to top Group D with six points, while Vietnam remain empty-handed on third place.

Vietnam are scheduled to face Yemen next Wednesday and Iran will complete their group stage fixtures against Iraq on the same day.