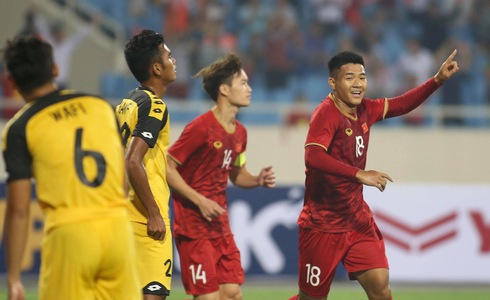 Vietnam were off to a flying start at the 2020 Asian Football Confederation (AFC) U23 Championship Qualifier as they thrashed Brunei 6-0 in their Group K opener at My Dinh National Stadium in Hanoi on Friday evening.

Vietnam, who finished second at the 2018 edition of the continental youth championship held in China, produced a commanding display with three goals in each half, topping their group with three points, and will now turn their attention to their match against Indonesia on Sunday.

With the dominating possession of 80 percent, Vietnam opened the scoring with Ha Duc Chinh’s header in the 11th minute and Nguyen Thanh Chung doubled the tally 13 minutes later before Dinh Thanh Binh gave Vietnam a 3-0 lead with a first half added time strike.

Brunei continued to leave no significant impression after the two teams return from the locker room. On the contrary, they fell further behind in the second half.

Trieu Viet Hung scored Vietnam’s fourth goal at the hour mark and Huynh Tan Sinh converted from the penalty spot in the 77th minute to give Vietnam a 5-0 lead before Nguyen Quang Hai, who substituted Ha Duc Chinh, rounded off Friday evening’s game with the sixth in added time.

The 2020 AFC U23 Championship Qualifier’s Group K consists of Vietnam, Thailand, Indonesia and Brunei. All matches of this group place at My Dinh National Stadium in Hanoi from March 22 to 26.

The qualifying tournament has attracted 44 teams which have been divided into 11 groups of four. The top 16 teams will qualify for the 2020 Asian Football Confederation (AFC) U23 Championship finals in Thailand next year.

At the 2018 AFC U23 Championship, Vietnam wowed the whole continent with their fairytale-like run when they finished second with a regretful last-minute defeat against that year’s champions Uzbekistan.