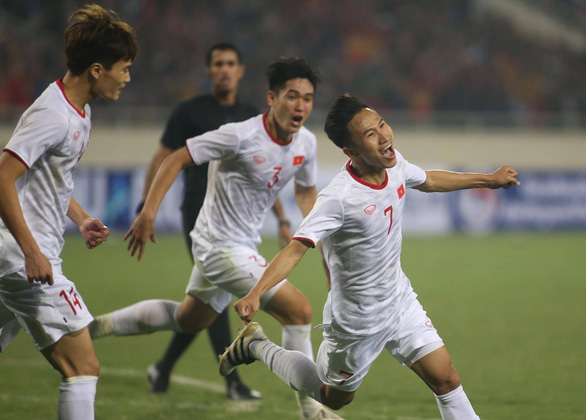 Vietnam’s securing their second consecutive victory in the 2020 Asian Football Confederation (AFC) U23 Championship qualifiers over Indonesia in Hanoi on Sunday was not enough to guarantee the Golden Stars qualification for the final tournament.

The Vietnamese left it late to secure a 1-0 win over a tough Indonesian side with a 94th-minute goal by midfielder Trieu Viet Hung in their second Group K match at the My Dinh National Stadium.

The narrow triumph placed Vietnam second after Thailand in Group K, with Indonesia and Brunei holding the third and fourth spots, respectively.

Vietnam started the campaign by routing Brunei 6-0 on Friday, but six points after two games is not enough to guarantee them a berth in the final tournament, to take place in Thailand next year.

The last group-stage match against Thailand on Tuesday will be decisive for Vietnam, and they will have to play with their hearts and souls because only a victory would earn them the certain qualification as one of the 11 group leaders.

The 2020 AFC U-23 Championship, the fourth edition of the biennial international age-restricted football championship organized for the men's under-23 national teams of Asia, consists of 16 teams, with Thailand qualified as hosts.

The remaining 15 teams qualified for the final tournament will be 11 group winners and four best runners-up of the ongoing qualifiers.

Should Vietnam fail to beat Thailand to qualify as Group K leaders, they will have to earn at least a draw to be able to advance as one of the best second-placed finishers.

In the worst-case scenario that Vietnam lose to Thailand, the Golden Stars’ current low goal difference will make them inferior to other second-placed teams.

The current top four runners-up in 11 groups have the minimum goal difference of eight, compared to seven of Vietnam.