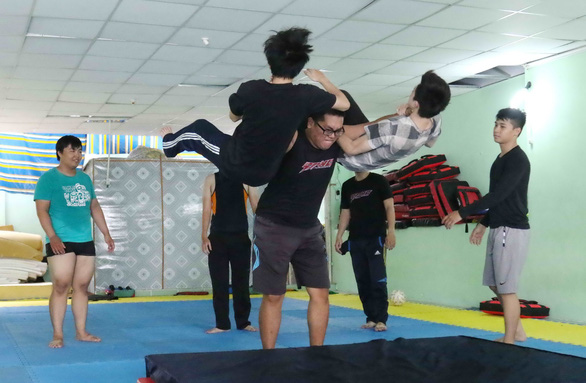 A group of men who share a burning passion for American-style professional wrestling are cherishing their dream of holding performances like the famous WWE SmackDown shows in Vietnam, even though they have to practice with non-standard training equipment in a rented house they call their ‘gym.’

With a great love of WWE SmackDown, a professional wrestling television program originating in the U.S., Huynh Cong Hung founded the Saigon Pro Wrestling Club (SPWC) in 2015, creating the first-ever playground for fans of this form of performance art in Vietnam.

SPWC members, which operates on a non-professional basis, practice in a rented room in District 5, where a gymnastics mat is placed to make the stage for training.

While the lack of standardized equipment puts the SPWC members at higher risk of injury as they practice lifting up, throwing or slamming down their opponents on this mat, it has not stopped them from following their passion, Hung underlined.

Similarly, all SPWC training outfits are made by a team member, for a set of standard clothing can cost up to several million dong. (US$1 = VND23,255)

“The pro-wrestling training shoes are really expensive but we think using shoes of other sports is no big deal,” Hung told Tuoi Tre (Youth) newspaper.

According to Hung, he and other SPWC members met through a Facebook page for wrestling enthusiasts several years ago.

“The members were really supportive of the idea when I told them my plan to found a pro-wrestling club,” Hung recalled.

As a practitioner of Vovinam, a Vietnamese martial art, and wrestling, Hung is confident that he can help others get to practice American-style professional wrestling.

As they come from different professions, the group members only gather for practice on weekends.

Four years since their foundation, the group has attracted some attention in Southeast Asia, as SPWC has been invited to different wrestling shows in Singapore and Thailand, holding one performance every two to three months.

Hung told Tuoi Tre that the biggest stage he and his members have ever performed on was in Singapore, which attracted about 600 spectators.

“The stage was not too big, but the atmosphere there was as lively as that of a real SmackDown show, with all the cheers from the audience and professional sound and light effects,” he recounted.

“That was a wonderful experience.”

Professional wrestling is a form of performance art and entertainment that combines athletics with theatrical performance, with wrestlers’ actions frequently scripted for dramatic effect.

This is why SPWC members are trying to improve their acting, according to Hung.

“All members here are amateurs who can sometimes lose their temper during a performance and stray from the script,” Hung said.

“Fortunately, I know a British friend who has experience in American pro-wrestling and can help us with this.”

Despite their lack of funds and standard equipment, SPWC, with their great enthusiasm, has been laying the groundwork for the development of American pro-wrestling in Vietnam.