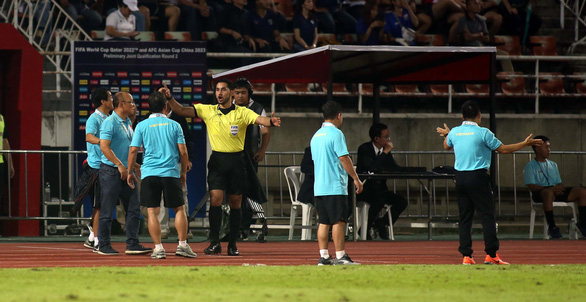 There were no goals scored in the Group G opener between Vietnam and Thailand in Asia’s second qualifying round for the 2022 FIFA World Cup on Thursday, but tension was felt not only inside but also outside the pitch of the Thammasat Stadium in Bangkok.

As players from both sides exerted efforts to start their World Cup qualifying campaign with a victory, their coaching teams engaged in heated arguments with each other twice along the pitch in the second half, when the pace of the match was intense.

The first altercation happened when Vietnam’s right-winger Nguyen Trong Hoang was lying on the ground after he was fouled by Theerathon Bunmathan in the 62nd minute.

As the referee did not show a card to the Thai player, Vietnam’s head coach Park Hang Seo and his assistants started to object to his decision.

The coaching teams of both sides then engaged in a quarrel, which eventually escalated to the point that the fourth official had to intervene in the dispute.

As the game drew to a close, it was Thailand’s head coach Akira Nishino who started to lose his temper.

As Bui Tien Dung was lying injured on the pitch, Nishino approached the Vietnamese defender and tried to touch him, in an apparent attempt to call him to stand up, as he believed the player was faking his injury.

The two coaching teams, including coach Park, thus engaged in yet another row, despite an attempt to intervene in by an assistant referee.

As they were quarreling, a member of the Thai coaching team pointed a finger at Vietnam’s doctor Choi Joo Young.

The Thai official eventually received a warning from the main referee, who also booked Vietnam’s coach Park with a yellow card.

As both Vietnam and Thailand wasted their few clear chances to open the scoring, Thursday’s game ended with a goalless draw, considered a positive outcome for the visitors.

Besides Vietnam and Thailand, Group G also includes Indonesia, Malaysia and the UAE.

The next Group G match will take place between Malaysia, who beat Indonesia 3-2 in the other Group G game last night, and the UAE on September 10.