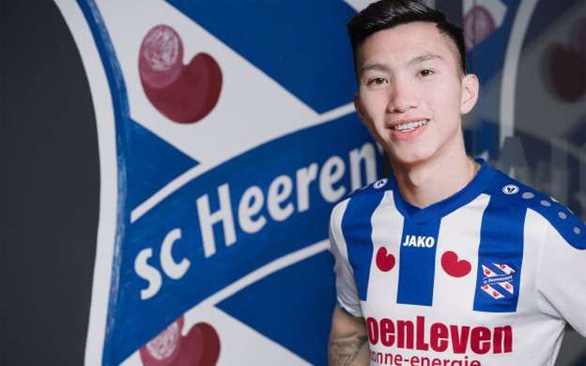 While Doan Van Hau has yet to have his debut at Eredivisie, the loan contract between the Dutch league's side SC Heerenveen and the Vietnamese international is already a commercial success as a local television station has obtained the right to broadcast the Eredivisie games in Vietnam.

The 20-year-old Vietnamese defender was loaned by his club Hanoi FC to SC Heerenveen on a one-year term last month, with the Dutch club retaining a buy-out clause after the contract ends.

The contract has drawn a huge number of new Vietnamese supporters to the Dutch club, and football fans in the Southeast Asian country also wanted to watch their beloved man play at Eredivisie, the Netherlands’ top division league with 18 clubs competing in 34 rounds.

Their wish came true when Ho Chi Minh City Television, or HTV, announced on Thursday it had acquired the telecast right of the Dutch league for the 2019-20 season.

The broadcast rights deal, whose value is not disclosed, allows HTV to air four games of the Eredivisie per week on its channels HTV9 and HTV The Thao, according to a source close to Tuoi Tre (Youth) newspaper.

HTV will prioritize broadcasts of SC Heerenveen matches, so Vietnamese fans can cheer for the left-footed player from home, as well as games played by big clubs such as Ajax Amsterdam and PSV Eindhoven.

Van Hau is scheduled to make his debut at Eredivisie at 5:15 pm on September 22 (Vietnam time), when SC Heerenveen play Utrecht at home in the league’s seventh round.

SC Heerenveen have seen the number of followers on their official Facebook page jump more than 450 percent from 75,000 to 339,000 after news of Hau’s moving to play in Europe made headlines in Vietnam.

Hau has an impressive height of 1.85m as per Vietnamese standards.

He was recruited to the national team at the age of 18 in 2017, and has so far made 18 appearances and key contributions to senior and junior national squads.

The defender is the first-ever Vietnamese footballer to play in the Netherlands, and only the second to play in Europe now, following Cong Phuong, who signs for Belgium’s Sint-Truiden.

SC Heerenveen will have to pay Hau 436,000 euro (US$482,150) a year, the minimum wage for an Eredivisie side to pay for its non-EU players so they can obtain a work permit to play professional football in the Netherlands, according to the club's technical manager Gerry Hamstra.

"But we see many sporting and commercial opportunities.”

Many famous footballers had played at SC Heerenveen before they rose to stardom, including former Manchester United star Ruud van Nistelrooy, Klass-Jan Huntelaar, a current striker of the most successful Dutch club Ajax, and Denzel Dumfries and Daryl Janmaat, who are both Dutch internationals.