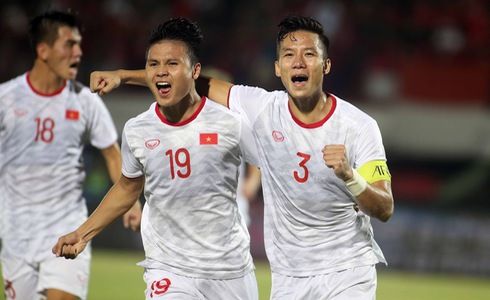 Vietnam continued their campaign in Asia’s second qualifying round for the 2022 FIFA World Cup with a convincing 3-1 win over Indonesia in their Group G encounter in Bali on Tuesday evening.

This is Vietnam’s second consecutive victory within five days after they put one goal past Malaysia in Hanoi last Thursday.

The first 25 minutes of the match passed with few notable chances for either side.

In the 26th minute, Doan Van Hau received the ball from Nguyen Quang Hai’s corner kick, drawing away the attention of the Indonesian defensive line, but the SC Heerenveen star could not convert his header.

As a host defender failed to clear the ball, Do Duy Manh touched the ball in from close range and opened the scoring spree for Vietnam.

The hosts could not find an equalizer in the remainder of the first half, and both teams headed for the changing room at 1-0 on the scoreboard for Vietnam.

Vietnam were awarded a penalty as Indonesian captain Yanto Basna had to foul midfielder Do Hung Dung inside the 18-yard box just minutes into the second half.

The visitors’ captain Que Ngoc Hai grasped the chance to score the second goal in the 53rd minute.

The Saudi Arabian referee gave Vietnam another penalty in the fifth injury minute as Otávio Dutra pulled Hai down in the box, but Do Hung Dung wasted the opportunity.

Vietnam have earned seven points, placing them second behind Thailand with the same points in Group G, followed by the UAE (six points), Malaysia (three points), and Indonesia (zero points).

The Vietnamese will host the UAE in Hanoi on November 14.

Highlights of three goals scored by Vietnam in their 3-1 win over hosts Indonesia in Bali on October 15, 2019. Video: VTV