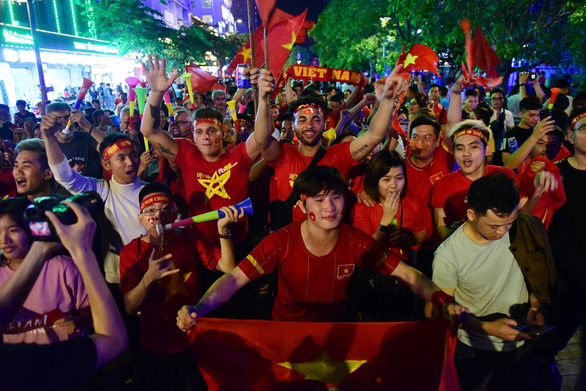 As Vietnam will take on the UAE in their fourth 2022 FIFA World Cup qualifier tonight, November 14, a free public viewing will be held on massive projector screens on Nguyen Hue Pedestrian street in downtown Ho Chi Minh City.

The two teams will face off at My Dinh National Stadium in Hanoi at 8:00 pm (Vietnam time).

For those who were not able to get stadium tickets, the game will be aired live on various channels and cable networks, including K+PM, VTC1, VTC2, VTC3 and VTC9, national television channel VTV6, and HTV The Thao channel.

In Ho Chi Minh City, five gigantic screens have been set up on Nguyen Hue Pedestrian Street in District 1 for the public to enjoy the game, free of charge.

The public screening is the first to be held since Vietnam drew against Thailand in September, due to broadcast fee and sponsorship issues.

Other public venues, such as the Ho Chi Minh City Youth Culture House at 4A Pham Ngoc Thach Street in District 1, will also screen the game.

Vietnam are currently second in Group G of the Asian leg of FIFA World Cup qualifiers, with seven points accrued after having won two out of three matches.

The UAE are in third with six points.

The Asian section of the 2022 FIFA World Cup qualification includes 46 teams competing in four rounds for a total of 4.5 slots (four direct slots and one inter-confederation play-off one) in the final tournament, set to be held in Qatar.

After the match against the UAE, Vietnam will face Thailand, also at My Dinh National Stadium, on November 19.