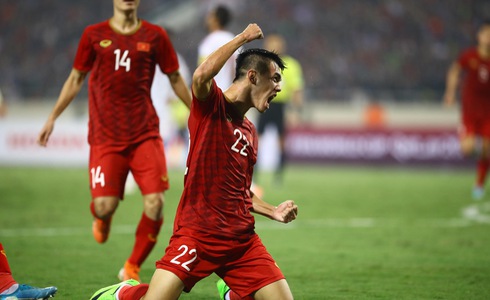 Vietnam are now on top of their group following a narrow triumph over the UAE in 2022 FIFA World Cup qualification in Hanoi on Thursday night.

The showdown at My Dinh National stadium unfolded in a tense vibe as both sides played cautiously right after kick-off.

The hosts and visitors were involved in a slow tug of war most of the first half before a red card turned everything around.

Seven minutes after a UAE player was sent off, a Vietnamese forward scored the winner, leading to Vietnam topping their Group G.

Vietnam and the UAE were not willing to take any risk so there were no clear chances as two-thirds of the first half had gone by.

But a breakthrough came in the 37th minute, when striker Nguyen Tien Linh sprinted for a pass from Do Hung Dung and he faced only the goalkeeper in front.

Defender Khalifa Al Hammadi fouled Tien Linh and was given a red card.

All of Vietnam’s hopes were pinned on Nguyen Quang Hai as he stepped up to take the resulting free-kick, but his left-footed shot hit the wall.

However, the Golden Dragons did not have to wait for long because Tien Linh scored in the 44th minute.

Hung Dung’s pass from behind found Quang Hai but the latter let the ball roll toward Tien Linh.

The striker immmediately fired off a lightning shot from around 25 meters to score the winner.

In the 60th minute, Doan Van Hau crossed the ball from the left flank but Tien Linh narrowly failed to convert.

Vietnam netted no more goal in the remaing time despite them fielding more strikers and the UAE playing with ten men.

The Golden Dragons will play Thailand again in Hanoi on November 19. The two drew 0-0 in Bangkok on September 5.

Malaysia will also clash with Indonesia in Kuala Lumpur on November 19.