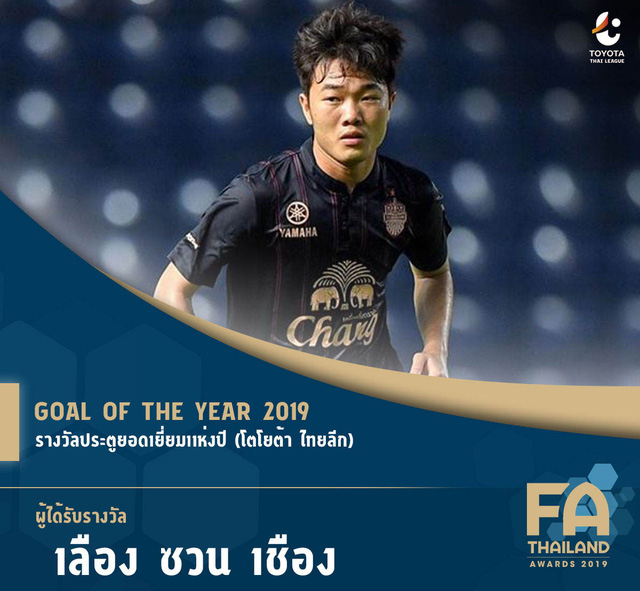 Vietnamese midfielder Luong Xuan Truong’s free kick for Thai football club Buriram United in May 2019 has earned him the ‘Goal of the Year’ prize presented by the Football Association of Thailand (FAT) at the FA Thailand Awards.

The 2019 FA Thailand Awards, the third edition of the annual event, was held on Thursday to honor the outstanding achievements in Thai football during the past season.

Among the 30 individuals recognized at the event, Vietnam’s Luong Xuan Truong took home the award for ‘Goal of the Year’ for a free kick he scored for Buriram United in a match against Nakkhon Ratchasima in the ninth round of the Thai League 1 on May 11.

Truong’s stunning curved kick sent the ball into the top corner of the net from 23 meters, his first goal, which contributed to the club's 2-0 win.

It was also Truong's only goal for Buriram before his year-long contract was terminated in June, just four months after he was loaned from Vietnamese club Hoang Anh Gia Lai FC.

The midfielder returned to Hoang Anh Gia Lai FC in that same month and then competed for the Vietnamese side in the second half of Vietnam’s top-flight V-League 1 last season.

Truong, 24, is among the first batch of young football talents to graduate from the Hoang Anh Gia Lai academy, which started its training program with support from English Premier League side Arsenal in 2007.

Several graduates of the academy, including Truong, have made a name for themselves on the Vietnamese U23 team, where they have achieved international and regional accomplishments.

Truong played important roles in Vietnam’s success in 2018, including their second-place finish at the AFC U23 Championship in January, fourth-place of the Asian Games tournament in August, and most remarkably, the ASEAN Football Federation (AFF) Cup in December.

With contributions of players from the training academy, Vietnam’s national team even made it to the quarterfinals of the 2019 AFC Asian Cup in Qatar in January.

Before moving to Buriram, Truong played for South Korea’s Incheon United and Gangwon FC in 2016 and 2017, respectively.