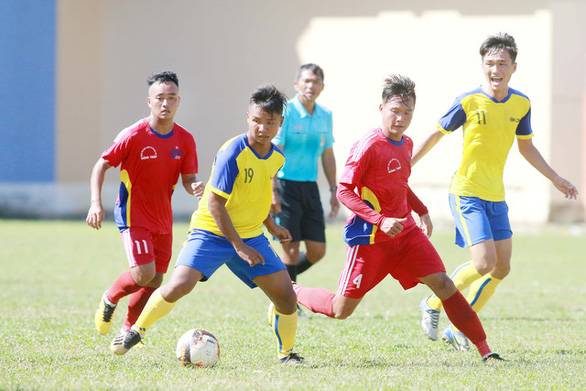 The Vietnam Football Federation (VFF) has slapped 11 players on the under-21 football team of the Mekong Delta province of Dong Thap with bans and fines for betting on the outcome of their own game.

The violation was committed during the team’s match against their rivals from neighboring Vinh Long Province on June 19, 2019 in the Group C qualification for the national U-21 tournament.

The violation involved nine out of 11 first-team players and two reserve-team ones, who bet VND150 million (US$6,448) that the game would end with two goals or less.

As the game ended in a 1-1 draw, the Dong Thap players won back their bet money and an extra VND133 million ($5,718), which they split among themselves.

Dong Thap later qualified for the national U21 tournament, where they reached the semifinals.

Huynh Van Tien, 21, was found to have initiated the betting and enticed other players in the team to join him.

He thus received the heaviest penalty in the form of a VND5 million ($215) fine and a five-year ban from VFF football activities.

Other players involved include midfielder Tran Cong Minh and defender Vo Minh Trong, members of the national U19 football team that qualified for the AFC U19 Championship last year.

They have been fined VND2.5 million ($107) each and slapped with a six-month ban from activities hosted by VFF.

According to head of VFF’s discipline department Vu Xuan Thanh, some of the players only learned about the betting when the game had already started and were then persuaded to join.

With their suspensions being implemented, these players will likely be barred from the upcoming V.League 2, the second-tier professional association football league in Vietnam, and the Vietnamese National Football Cup – the winners of which will qualify for the AFC (Asian Football Confederation) Cup – slated to open on May 24, 2020.

But their suspensions will have ended by this year’s national U-21 tournament, which is scheduled for November, with Dong Thap being the hosts.