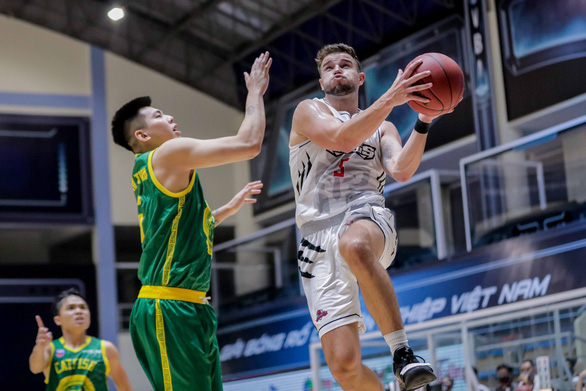 The Game 2 between Cantho Catfish and Thang Long Warriors in the VBA Premier Bubble Games - Brought to you by NovaWorld Phan Thiet needed overtime to decide the winner in thrilling style as the two teams tied at the end of regulation.

While the league was organized in a centralized, isolated, and no-spectator format, Cantho Catfish played host to Thang Long Warriors.

However, it was Thang Long Warriors that staged a better start thanks to the excellence of Timothy Guers, who scored eight points in a row within the first three minutes of the first half.

The Hanoi-based team showcased smooth teamwork before they somewhat slumped in the second quarter and solely depended on Guers, who ended up contributing 13 out of 19 points to coach Predrag Lukic’s side at half-time.

Although Cantho Catfish took some time to catch up with their opponents and only scored five points in the first four minutes, they came back strongly to equalize the score at 12-12 in the sixth minute.

At this point, the Thang Long Warriors went on the defensive with focus on Cantho Catfish’s 2.08-meter ‘giant’ Jared Sam and went into the break with a 19-17 edge.

Cantho Catfish went ahead on four points four minutes into the second half, with outstanding performances from Le Hieu Thanh and William Tran.

It was Guers again that helped Thang Long Warriors grab a 38-30 lead a few minutes later.

The Hanoi side widened the gap to 57-45 at the end of the third quarter, but the Can Tho-based team tried their best to tie the game at 79-79 at the end of regulation in dramatic fashion.

The overtime was intense as the two teams took turns racking up points.

Eventually, the Cantho Catfish won 95-90 against the Thang Long Warriors.

The VBA Premier Bubble Games - Brought to you by NovaWorld Phan Thiet has been broadcast on OnSports channel and the two over-the-top media services VTVcab On and Myclip since October 4.