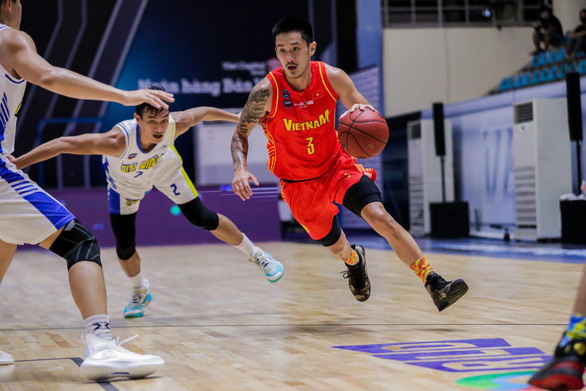 It was not until Game 32 of the VBA Premier Bubble Games that Khoa Tran, a key pillar in the Vietnamese national basketball team’s winning two historic bronze medals at the 2019 Southeast Asian (SEA) Games, made his 2021 VBA debut.

VBA fans finally got what they were waiting for in Game 32 of the VBA Premier Bubble Games - Brought to you by NovaWorld Phan Thiet, when defender Khoa Tran, who sports No. 3 on his jersey for the Vietnamese national basketball team, took the court.

Although Khoa Tran only played for 20 minutes, he put up 15 points and four assists.

Throughout the game, his team became continuously more creative with bold breakthroughs into the three-pointer line.

There was no doubt that the 24-year-old player is the missing piece in the tactical layout of coach Kevin Yurkus.

While all seven remaining clubs in the tourney have significantly increased in strength thanks to their trios of two foreign players and one of Vietnamese origin, the Vietnamese team, who has only won four of their past eight games, has zero foreign players in their formation.

The Vietnamese national basketball team lacked Khoa Tran in their first seven games because he had some psychological problems and was not ready to play on the court.

Although Khoa Tran’s time on the court in Game 32 was short, he is a promising factor as the Vietnamese team attempts to transform for the rest of the VBA Premier Bubble Games.

“I am very honored to represent Vietnam, not just myself, it is a great pride,” Khoa Tran said.

“I want to bring victories to the Vietnamese team.

“In addition, I really want my whole family to come back to Vietnam to watch me play.

“If that really happens, I’ll be very happy.”

The Wings surprised everyone with a formation comprising all Vietnamese players to save their forces for the next games.

Thanks to that, the Vietnamese team had an easy game.

Khoa Tran, after a long absence, also returned with an impressive performance to help the Vietnamese team snatch an overwhelming 82-51 victory.