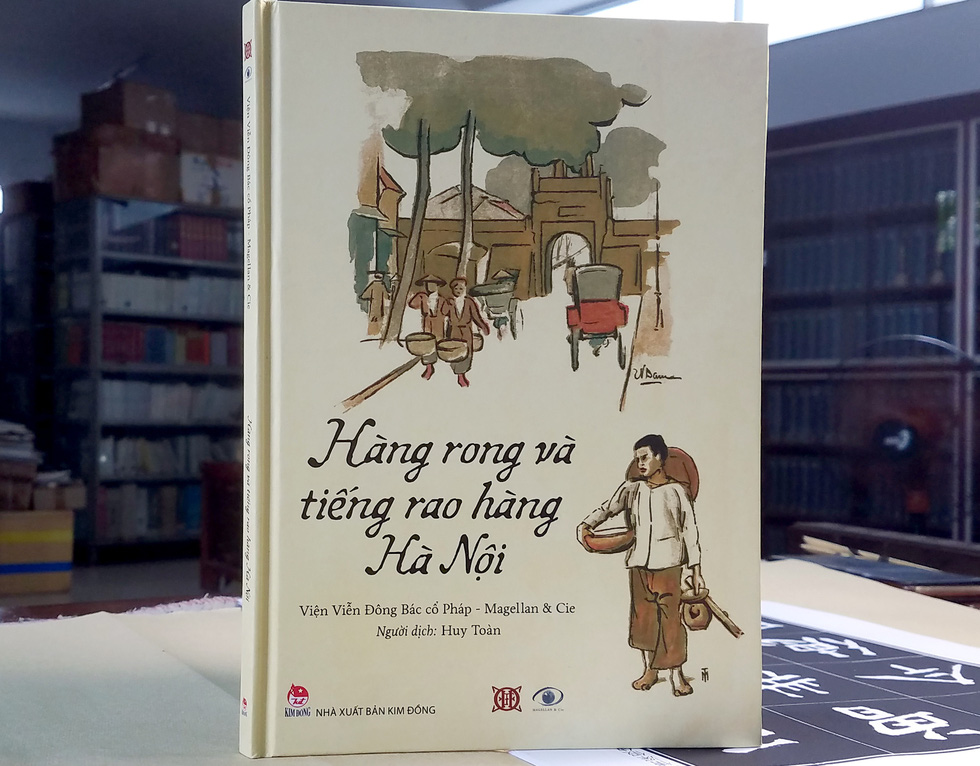 A recently released art book has left nostalgia buffs reminiscing visually and audibly about how street vendors in Hanoi and their haunting cries were like several decades ago.

The art book, ‘Hang Rong Va Tieng Rao Hang Ha Noi’ (Street Vendors and Street Cries of Hanoi), has recently hit shelves to nostalgia buffs’ delight, featuring a collection of sketches, drawings, and watercolor paintings created by instructors and 15 students at the erstwhile Indochina College of Fine Arts, a prestigious art school in Vietnam in the 20th century, as well as black and white photos taken in the 1920s.

The famous art school is now known as the Vietnam University of Fine Arts.

Several of these students, including late Vietnamese artists Le Pho and To Ngoc Van, later rose to fame for their remarkable works acclaimed in Vietnam and abroad since then until today.

The book, with photo captions translated from French into Vietnamese, is a collaboration between local Kim Dong Publishing House and École Française d’Extrême-Orient (French School of the Far East – EFEO), an associated college dedicated to the study of Asian societies founded in Hanoi in 1990.

Many of the sketches from the recently released collection, bearing the autograph of To Ngoc Van, one of the country’s prominent artists, accentuate street vendors and their daily activities, including crisscrossing the streets of the capital city, beginning their day from pre-dawn hours and carrying a variety of fruits and vegetables, snacks and dishes to offer to passers-by for a living.

The musical notation of the peddlers’ cries to sell their wares, given by the art students themselves, helps bring the cries to life and record them in the most vivid way.

In what some foreigners have perceived of the peddlers’ cries, which gradually disappear in today’s modern, fast-paced world, they are short, easily recognizable mini-tunes which have been imprinted on almost everyone’s mind.

Apart from sketches and drawings, the art book also boasts prized black and white archival photos with lens focused on old-fashioned markets, streets, and residents in Hanoi from 1920 to 1950.

Apart from giving a touch of nostalgia, the art book has been enthusiastically embraced and critically acclaimed for its historical value following its nationwide release.

According to translator Huy Toan, who rendered the book’s annotations and photo captions from French into Vietnamese, the project, initiated by the art teachers and their 15 students soon after the school establishment, catalogues street life in the capital city, centered around street vendors includin fruit, pho (Vietnamese noodle soup with beef or chicken), flower, tea and newspaper peddlers, scrap collectors, and electric appliance fixers.

“In addition to depicting the vendors’ postures, facial expressions, and gestures, the Western art teachers also recorded their cries by way of musical notation to vividly capture one of Hanoi’s unique cultural traits,” Toan said.

Dating back to 1925, the collection provides a nostalgic glimpse into the then popular casual wear, snacks, and the northern Vietnamese conversational style and way to refer to things, many of which have faded in today’s society.

Prior to the book release, viewers fell under the spell of the same sketches, drawings, and photos since they were showcased in an eponymous installation exhibition jointly organized by L’Espace and the EFEO in October 2019.