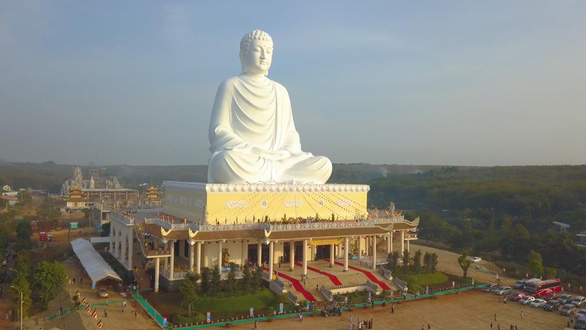 A gigantic Buddha statue, which stands 73 meters tall and required four years of construction, was inaugurated in southern Vietnam last week, claiming the title of the country's tallest.

In commemoration of the Buddha’s achievement of enlightenment on December 8 of the lunar calendar, Phat Quoc Van Thanh Temple in Binh Long Town, Binh Phuoc Province held the inauguration ceremony for a 73-meter-tall statue of the Gautama Buddha on January 20.

It is considered the tallest Buddha statue in Vietnam at the moment.

The ceremony was attended by Buddhist dignitaries of Binh Phuoc Province and Ho Chi Minh City, Nguyen Van Loi, secretary of the provincial Party Committee, as well as other province leaders and the Buddhists community in the locale.

It involves the Buddha statue being surrounded by a complex of 24 structures, each built on a plot of over 3,000 square meters in area.

The project came to life thanks to the profuse financial support of Buddhist patrons, namely the Minh Duc and Dieu Phuoc family.

The construction took the title of Vietnam’s tallest Buddha statue from the one-meter-lower structure at Khai Nguyen Temple in Hanoi.