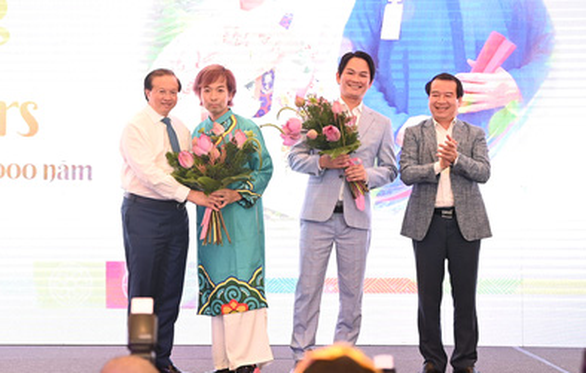 South Korean singer Joseph Kwon on Wednesday released his latest music video – an ode to popular tourist attractions across Vietnam in commemoration of 30 years of diplomatic relations between Vietnam and South Korea.

Ta Quang Dong, deputy minister of Culture, Sports, and Tourism, and Ha Van Sieu, deputy director of the Vietnam National Administration of Tourism, were among those present at the music video premiere, which was held in Hanoi.

During the ceremony, Joseph Kwon officially released two songs, Butterfly Flakes and Waiting For You, 5000 Years, both of which he composed and performed.

“I hope after watching my intricately produced music videos filmed in 19 provinces in Vietnam, many Koreans and friends from around the world will recognize the beauty and charm of Vietnam," Kwon said during the ceremony.

"Therefore, they will travel to Vietnam to experience the culture and the people's warmth.”

Kwon has been a fan of Vietnam since childhood and has lived and worked in the country for more than three years.

A conductor at the Korean Cultural Center in Hanoi, Joseph Kwon has composed several songs praising Vietnam, including Go Vietnam Go Go in 2020; You Are in My Heart, which were released in Vietnamese, Korean, and English; and Peace – a song written to honor Vietnamese cuisine.

Kwon’s songs have been featured on Vietnamese national television over 50 times.