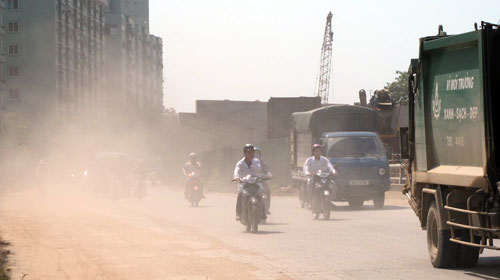 Lead dust air pollution is increasing in large cities nationwide, especially in Hanoi and Ho Chi Minh City, where pollution levels are two-four times higher than the limit, according to an air quality report by an environmental agency. The report was released by the Environment General Department (EGD), under the Ministry of Natural Resources and Environment, at a seminar held on Wednesday to share opinions on the draft text of the 2013 National Environmental Report. Hoang Duong Tung, deputy head of the EGD, warned that lead dust pollution in Vietnam has increased in the past few years, especially in major cities with large populations and high traffic volume. The pollution has worsened across the country, particularly in Hanoi and Ho Chi Minh City. Such high pollution levels are usually recorded in areas with crowded traffic routes and axes, Tung said. He emphasized that lead dust pollution, together with other negative factors, has undermined the quality of air in large cities. Among the ingredients of dust in Vietnam, fine particles of dust account for 61-87 percent of the total volume of dust, according to a report by the EGD’s Environment Observation Center.  In addition, the air environment in areas around production facilities is also polluted, posing heath threats to workers and local residents. Air pollution in many rural areas has also been worsened through the burning of straw by farmers after the harvest, and by emissions from open garbage dumps. Smoke pollution from neighboring countries is also detrimental to the quality of air in Vietnam, the EGD said.   In order to reduce pollution and improve air quality, experts at the seminars asked concerned agencies to take effective measures to inspect and reduce emissions from road vehicles, control dust pollution in construction and transport activities, strictly handle and punish polluters, devise and carry out programs to improve air quality, and launch campaigns to enhance public awareness of protecting the environmental in general, and air quality in particular.     In addition, environment management agencies must be reformed to improve their operating results, experts said, adding that national standards on air environment should be perfected and air quality management programs must be also improved.

Meanwhile, many experts have long warned about lead poisoning, which is a medical condition in humans and other vertebrates caused by increased levels of the heavy metal lead in the body.

Routes of exposure to lead include contaminated air, water, soil, food, and consumer products. Lead interferes with a variety of body processes and is toxic to many organs and tissues including the heart, bones, intestines, kidneys, and reproductive and nervous systems.