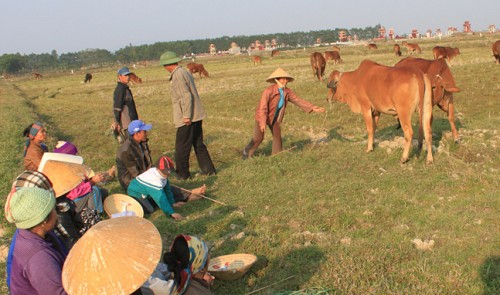 Le Thi Thoi and her family members have been cultivating rice on the 3,500-square-meter paddy field granted by the local government for the last 30 years, but she had no choice but to get rid of the field as the income from it is not enough to make ends meet.

Under a governmental policy, Thoi’s family received 10 Vietnamese acres of paddy field from the local government of the Hai Ha commune in Ha Trung District of Thanh Hoa Province for cultivation more than three decades ago.

A Vietnamese acre is equal to 500 square meters.

The paddy fields at first helped provide food for six members of the family. When her daughters got married, Thoi gave them 3 acres of the field, and continued to work on the remaining acres “until today when we could not stick to it any longer,” she said.

Thoi said the input costs for a crop are around VND1.3 million - VND1.5 million per acre, but she can only earn VND1.8 million per acre from selling rice at harvest time. With two crops per year, the total annual income from every acre of the paddy field is only VND600,000 to VND1 million.

The meager income from growing rice has sent 26 other households in Ha Hai commune to ask to return the paddy fields to the local government, while dozens of other families have left their fields deserted and covered with weeds for years.

Farmers who abandoned their paddy fields switched to other jobs like construction or selling goods, and gained up to VND3 million per month.

In Hai Duong, another northern province, around 20 households have recently filed a petition to the local government asking for permission to return their granted paddy fields.

Nguyen Ninh Hoat, chief of the Quan Loc village in Tu Ky District, said none of the thousands of local farmers could manage to get rich from growing rice.

Hoat said the daily income is estimated at only VND10,000 per day, which is only enough to buy three cups of iced tea in an urban area.

“And if you wish to eat a bowl of pho, it means three days of hard work,” he said.