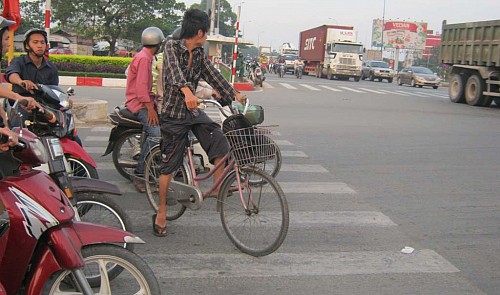 Editor’s Note: Beginning this week, Tuoi Tre News is launching a forum for discussion titled “Vietnam traffic in the eyes of foreigners.” We are calling on foreigners and expats to contribute stories that aim to solve the traffic problems in Vietnam. Send your stories or comments to us at ttn@tuoitre.com.vn.

We will start with an article by Terry F. Buss, an American expat in Hanoi. Buss shares rules pedestrians should follow gained from his own experience in Vietnam’s largest cities such as Hanoi and Ho Chi Minh City.

Any Vietnamese who has watched the traffic in Vietnam’s largest cities knows that they’re observing the beauty of a finely-orchestrated ballet of pedestrians, motorbikes, cars, buses and the occasional dog or chicken; outsiders will see the traffic as a total breakdown of society. So, as a tourist, or perhaps a returning expat Vietnamese, you can choose to be either a ballerina or a traffic fatality statistic. If you choose the former, here are a few rules of the street that may prove helpful. They only take about four years to master, but the time spent is worth it. This means you must visit Vietnam many times, something the Vietnamese would welcome.

Rule 1. As a pedestrian, never look drivers in the eye and never smile. Not only does this cause the driver to lose concentration, but it can also be interpreted as a challenge, in this case presumably to the death. It also means you’re likely afraid: drivers, like tigers, can smell your fear.

Rule 2. For the beginning crosswalk experience, try to find a child or elderly person to walk with. All Vietnamese children are cute, so no one is likely to run them down. Elderly people are the best choice though: if they’ve survived crossing the street for years and are still alive, they must know something. Do not force the young or the old to cross with you as Vietnamese frown on this behaviour. There is nothing worse than an irate grannie.

Rule 3. Try waiting around until a large group of people are about to cross the street. At best, a driver can flatten five or six people in a group, but not all. So the larger the group, the better your odds of success before crossing.

Rule 4. Sometimes, as you wait to cross, you might see a fallen tree branch or telephone pole. If you hold this aggressively beside you when you cross, it can deter drivers who would not otherwise stop. Of course, it is very likely that a driver will become agitated and chase you on the sidewalk for revenge.

Rule 5. If you find yourself standing on the curb for more than an hour unable to cross, try this: close your eyes and step off the curb. This works well a surprising amount of the time.

Rule 6. Do not assume that traffic actually stops at traffic lights. When a light turns red, there will be at least 50 to 100 motorbikes and an occasional taxi or two that will continue through the red light. When motorbikes or taxis are stopped at a red light, never assume they will remain that way: the front row of bikes or cars will try to shoot across an intersection trying to gain the advantage. Unfortunately, by the time you’ve waited for the stragglers and early starters to clear, your green light will have turned red.

Rule 7. Do not assume that traffic lanes and dividers separate drivers into oncoming and outgoing lanes, especially at intersections. Traffic lanes are merely suggestions. This can be confusing when every driver is headed in the same direction on a two-lane street.

Rule 8. There is no such thing as a pedestrian crosswalk. If you think you see one, it’s a mirage.

Rule 11. Understand the unofficial points system. Drivers accumulate points for running over different kinds of people. Children and the elderly are worth the fewest points, because this is just not sporting. Hitting someone in uniform is worth a lot more points: these people are not to be messed with but if a driver is lucky enough to score a hit and get away, he will be admired. Running over college students achieves very high scores, especially if the driver can hit several at a time. This is because college students are very wiry and agile, something like trying to catch fish in the ocean by hand. Of course the most points go for tourists, not because they are difficult to run down, but because they are funny especially in groups. Drivers find some joy in watching them scatter like chickens or freeze in the middle of the street unable to move. Annually drivers with the highest scores are awarded trophies for their efforts.

Rule 12. Never bend over to pick up a coin on the street. Every child around will beat you to it no matter how far away they are, and you will get a rather unpleasant introduction to a motorbike tire up the backside.

Golden Rule. On a serious note, if you can’t remember the rules above, remember this: your health depends mostly on understanding your adversaries. Motorbikes are actually the easiest. They can bob and weave and avoid just about anything, including a tourist. It is not unusual to see a motorbike laden with 100 chickens or a refrigerator expertly negotiate the traffic. Automobiles are much more problematic. They cannot swerve to avoid hitting you, as at any given time cars are surrounded by hundreds of motorbikes whose handlebars are literally touching the car’s sides as it drives. This is why all cars in Vietnam have mysterious dents along their sides. Anyway, as cars are faced with flattening one pedestrian or derailing a hundred motorbikes, the tourist loses every time. City buses and trucks are the very worse. They cannot swerve to avoid pedestrians, and they require thousands of meters to stop. Some believe that bus drivers may actually like to crush tourists as a way to relieve boredom or have a little fun.

So, don’t be a chicken. Get out there and cross the street!