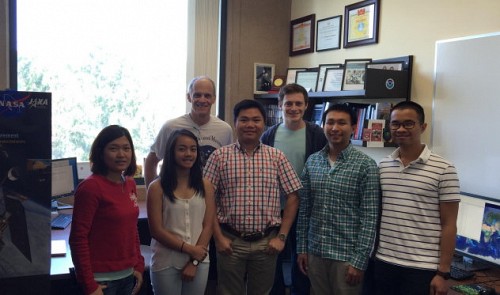 Vietnamese professor Nguyen Dinh Phu has made a name for himself in the U.S. with a mobile app that provides real-time rainfall information via user-contributed data.

Users can submit the precipitation at their location to the app, which would then use the information combined with satellite data to generate a global rainfall map with specific timestamps.

iRain is expected to be a useful resource for both the public and research community, especially for improving the quality of real-time satellite precipitation observation, the app’s description reads.

According to Professor Phu, the significance of the app lies in its offer of credible knowledge of rain cycles and mechanisms of specific geographical locations rather than providing plain weather information.

Shortly after its launch, the application attracted attention and support from a number of published U.S. agencies such as the National Aeronautics and Space Administration (NASA) and the National Oceanic and Atmospheric Administration (NOAA), as well as from the United Nations Educational, Scientific and Cultural Organization (UNESCO).

The young Vietnamese professor was sought by international media after he introduced iRain at the 7th annual Sustainable Innovation Forum in Morocco last November.

Despite the initial success, Phu has kept both feet on the ground, admitting that there is still a lot of room for improvement in the app, during an interview with Tuoi Tre (Youth) newspaper.

“There are still shortcomings in the use of satellites for weather observation, and we are working to improve our algorithm,” Professor Phu said. “We are also looking to make our app friendlier to the common user and run better on slow connections.”

Crystal meth to blame for serious crimes in Vietnam