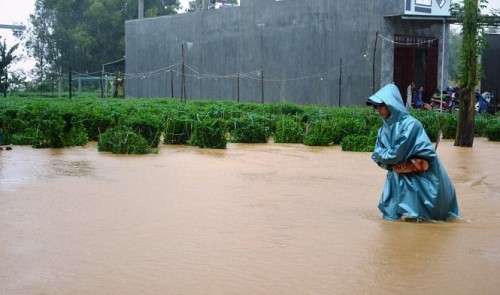 Bad weather is forecast for northern and central Vietnam this week, with the north to experience yet another cold spell while central areas are expected to experience more flooding.

Beginning tonight, December 21, cold weather will hit the north, lowering temperatures to between 15 and 18 degrees Celsius tomorrow, according to the National Center for Hydro-Meteorological Forecasting (NCHMF).

Temperatures in the northern-most mountainous areas will be as low as 13 to 16 degrees Celsius.

Hanoi will start to experience rainfall from Thursday, with temperatures from 16 to 18 degrees Celsius.

On Thursday, waters off the Gulf of Tokin and in northern East Vietnam Sea will rise, with winds of 39kph gusting up to 62kph.

The cold snap is forecast to cause rainfall in northern provinces from Thursday afternoon, while central provinces from Nghe An to Quang Ngai will also be affected.

With regard to ongoing floods in central Vietnam, which has killed 24 as of Tuesday, the NCHMF said water levels began lowering on Tuesday morning, but remained at the alert level of 0.4 meters.

As of Wednesday morning, the water level is expected to fall fall further, educing floods in Binh Dinh Province.

However, a new tropical depression is forecast to form in the southeastern part of the East Vietnam Sea on Saturday or Sunday, and is expected to head toward central Vietnam once it is gathered enough strength.

The tropical depression will bring cold weather, rainfall and floods to the region between December 27 and 31, the NCHMF has warned.