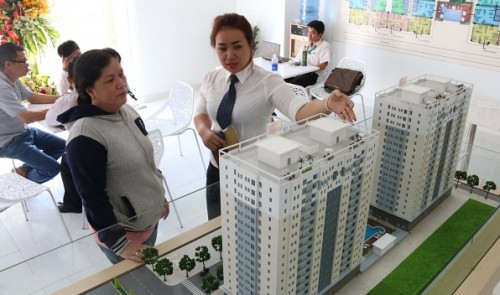 Vietnam’s central bank is studying the feasibility of offering a new home loan package that would allow public servants with a stable income to borrow up to VND2 billion (US$94,135) each at preferential interest rates to purchase condominiums or terraced houses.

The beneficiaries of the proposed package include public officials, civil servants, and members of the armed force whose family income is around VND25 million ($1,177) a month in total, Nguyen Tien Dong, head of the credit department under the State Bank of Vietnam (SBV), told Tuoi Tre (Youth) newspaper in an interview published Friday.

These borrowers would be able to access loans worth VND2 billion at most, which is normally equal to 70 percent of the value of the attached house or condominium they are to buy, Dong said. The loans have a maximum term of 10 years and a fixed interest rate, ranging from 6 to 7.5 percent per annum, depending on the lender.

Borrowers will use the property they buy as collateral for the loans.

“The VND25 million income condition is based on the combined incomes of the borrower and his or her spouse,” Dong elaborated.

Civil servants and members of the military can access preferential loans with a 6 percent interest rate per year over ten years.

“Besides the VND30 trillion package for low-income earners, the government should also assist people with a higher income with a larger credit package to suit their needs,” Dong said.

Those who earn pretty high incomes currently look to buy apartments that are 70 to 100 square meters in area, according to the SBV official. This provides enough space to house a buyer’s extended family.

While only five banks were selected by the SBV to join the VND30 trillion home loan program, Dong said that any bank, no matter if it is public or private, can participate in the newly proposed credit package.

“If approved, this credit package will greatly support not only the realty sector or house buyers, but also the whole economy,” the central bank official asserted.

The SBV will continue studying the plan and will submit it to the government for consideration.

However, experts say they are concerned about the plan’s feasibility.

Dr. Le Tham Duong said he is afraid that the package will fail to attract lenders, due to the high risk of fixed lending interest against volatile deposit rates.

“Banks can only calculate and predict interest rate development for a certain period of time, not ten years,” said Dr. Duong, the dean of the business administration department at the Ho Chi Minh City Banking University.

If a bank provides a home loan to a borrower at 7.5 percent a year under the newly proposed package, that lending interest rate will remain unchanged for ten years, regardless of the interest rate the lender has to offer to attract depositors.

“So lending at 6 to 7.5 percent is infeasible even now, let alone for a ten-year term,” the general director of a major joint stock commercial bank in Ho Chi Minh City said.

Bank representatives thus said they may consider joining the program if there is support from the government and the SBV.

“If the loans are granted at unfixed [lending] interest rates, borrowers may hesitate to apply,” Chau said.

Experience from the implementation of the VND30 trillion credit package should also be taken into account.

As of the end of last month, only VND2 trillion worth of loans was disbursed to 7,000 households and individuals, according to the Ministry of Construction.

Nineteen projects to build social housing have also received VND1 trillion from the package so far, the ministry said.