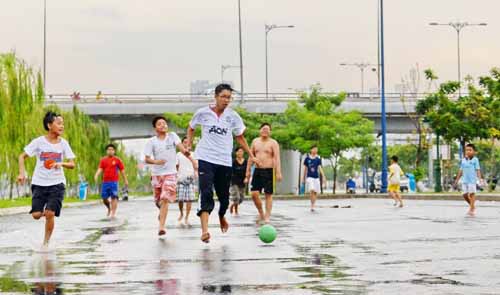 Vietnamese teenagers face a serious imbalance in their consumption of time for studies, relaxing, and recreational activities.

A recent survey of 400 students aged from 13 to 19 in Hanoi and Ho Chi Minh City has illustrated an ‘immense gap’ in the lives of urban teenagers and highlighted worrying problems about their conceptions, attitudes, and behavior.

The teenagers in the survey spent the most time within the four walls of classrooms, with little left for sports or community-related activities.

Besides the time at school, 92 percent of students said they have ‘extra time’ for studies at the homes of teachers for two or three subjects, including mathematics and English.

According to the survey, conducted by TITA Research, a Vietnamese market research and consulting company, urban teenagers spend 10.5 hours a day on studies at school, home, and even at the homes of teachers.

They have only four hours a day for entertainment, but this is mainly devoted to television and the Internet, where they play games and chat through email and social networks.

In summer, where there is no school, they spend more time in bed and increase their time with TV and computers to six hours a day.

Teens admitted that they use computers to play games more than for studies. Mobile phones are also used to play games.

Though sports are vital to the physical and mental growth of teenagers, very little time is devoted to these activities.

Seventy percent of the students in the survey replied that they take part in no physical activities on a school day. Especially troubling is the fact that 80 percent of female students said they do not play sports at school.

During summer, only 43 percent of students said they are engaged in sports, a number that falls to just 29 percent for girls.

However, most of the teenagers have good academic results. In the 2013-14 school year, 85 percent of them were ranked ‘good’ or ‘rather good’ – compared to A levels in the U.S.

One notable fact is that students get better grades if they spend more time studying at their teachers’ homes.

As a result, 20 percent of the surveyed students have a negative attitude toward their teachers, as they blame them for saving lessons for ‘extra time’ at home, instead of teaching them in the classroom.

Regardless of their diligence in their studies, 46 percent of teens said they do not know what type of career path they want to pursue.

It seems that many students consider their studies a duty, instead of a motivation to possess knowledge.

Phan Quang Thinh, the head of the survey, admitted that parents and teachers should focus on “helping students build a correct manner toward their studies for possessing knowledge.

“Besides, parents and teachers need to support teenagers in discovering a career they may be interested in,” Thinh added.

In fact, parents spend less than two hours a day talking with their children. Most of this time is spent at the dining table or watching television.

Sadly, most of these interactions between parents and children are uncomfortable for teens, because they are often reprimanded for their social lives.

Consequently, 30 percent of teens blame their parents for disregarding their needs and desires. Forty percent said they are often intimidated by their parents, and 50 percent admitted that they are shy about telling private stories to their parents. When they are told to do something against their will, 33 percent of the teens hesitate to follow orders, while the remainder tells their friends or listens to music to forget it.

Tran Dai Loi, deputy principal of Thai Binh Middle and High School in Ho Chi Minh City, agreed that many parents do not know how to be parents. “They spend no time on their children but often blame them for problems and prevent them from taking part in social activities since they worry about them becoming spoiled,” he added.

The survey found that the common age of puberty is 12 for girls and 13 for boys, but half of them have no knowledge of sex and gender.

Specially, 15 percent of teens in the survey said they have boyfriends or girlfriends, but nearly half hide this fact from their parents.

A section of teens also has an open attitude toward sex, as 14 percent of them believe that having sex between the ages of 15 and 18 is possible, and 15 percent of teens say they are willing to have sex with their boyfriend or girlfriend.