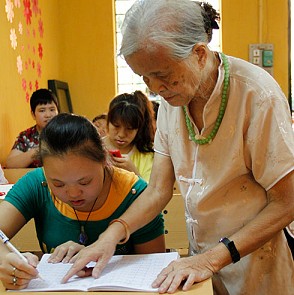 A 69-year-old man and an 82-year-old woman have devoted their time and money to raising students’ awareness of traffic safety and teaching physically and mentally challenged kids for free for almost 20 years.

They may be old, but they yearn to make as much of a social contribution as possible before their time runs out.

Tran Ngoc Tot, 69, who lives in Cao Lanh City in the Mekong Delta province of Dong Thap, is known as “Mr. Hai Traffic” to local students.

When he was no longer fit enough to continue his successful pig raising business, he began riding his bike around the neighborhood and offering home veterinary treatment.

In his travels he witnessed a large number of traffic accidents, including fatal ones.

The ghastly sights and high fatality rate began to haunt him and keep him from sleeping soundly at night.

Tot was stunned to learn that one of his clients, whose cattle he had treated the previous week, had died in a road accident.

Concerned about the safety of his child, who was studying at a local junior high school, and all the other students at the school, in 2008 he sought permission from the school’s administration to allow him a 5-10 minute talk on traffic safety at the national flag salutation ceremony each week.

His first talk was an instant success. The students and teachers listened attentively to his vividly demonstrated, real-life stories and useful advice on traffic safety.

Over the past seven years, the sexagenarian has gone to great lengths, patiently waiting at the school gates whenever the school day ends to remind students not to stand chatting or frolicking in the street, and their parents to park their bikes neatly and make room for passing vehicles.

He also meticulously takes note of specific violations by students to add examples to his talks and boost attention.

To further enhance students’ involvement, he invariably buys five to seven gifts, including clothing items and toys, mostly with his own money, to award to those who answer his questions correctly during each talk.

He also gives students advice on how to behave properly.

Despite his advanced age, Tot has tirelessly given talks on traffic safety at 14 schools across the city.

The principal of the one remaining school which Tot has yet to visit recently invited him to give a talk at the school.

Nguyen Minh Chi, chief of the provincial Traffic Safety Board, said that Tot’s talks have helped discourage local students from going through red lights and boost their traffic law compliance.

Local teachers also observed the notable moral improvement among their students thanks to Tot’s advice.

The leaders of several high schools in neighboring districts have also asked him to deliver orations regarding traffic safety and morality at their schools.

Ho Huong Nam, 82, who lives in Hanoi’s Tay Ho District, has run a free class for physically and mentally challenged kids over the past 17 years.

Her students’ disabilities range from Down syndrome and autism, to mental, hearing and mobility impairment.

Nam retired from her 30-year teaching post at a local elementary school in 1989.

Four years later, while volunteering to promote family planning in her neighborhood, she realized that many disabled kids were confined to their homes.

The idea of gathering them for a free class then crossed her mind.

After repeatedly declining to send their children to Nam’s class, as they assumed that little could help mentally-impaired kids, the parents were moved to tears at their initial progress, including polite manners and a few alphabet characters.

As word spread, more parents in the neighborhood sent their disabled kids to her class.

After moving between a few makeshift locations, Nam was elated when her class finally earned a well-equipped room in a junior high school in 2002, which offers her beloved students the chance to integrate with the outside world.

“Teaching the kids is a real challenge, as their concentration power and awareness are poor. I thus constantly vary my teaching approaches and always use pictorial demonstrations,” the old woman shared.

Most of her students now can write beautifully and do mathematical calculations at a fifth-grade level.

Nam spends her monthly pension of VND2.3 million (US$108) and her son’s meager allowance on running the class and buying books and snacks for the kids.

She steadfastly refuses the parents’ offers of monetary contributions and insists that they take their children to class every day.

Nam was one of the capital’s 10 exemplary citizens who were recently honored by the Hanoi People’s Committee.

She shared she would spend her VND10 million ($471) award on stationery for her students.