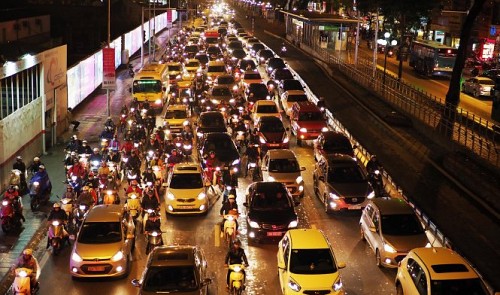 Editor's note: Arve Hansen is a postdoctoral fellow at the Centre for Development and the Environment in the University of Oslo, Norway. Describing Vietnam as one of his academic interests, Hansen was a coordinator, seminar leader and lecturer in development studies at the Kulturstudier center in the central coast town of Hoi An between 2010 and 2011. He lived and worked in Hanoi for quite a time, and did his PhD on transport in the Vietnamese capital.

He has also had a number of his writings about Vietnam published worldwide.

The University of Oslo fellow has sent Tuoi Tre (Youth) newspaper his suggestions below on how to solve Hanoi’s traffic nightmare.

As anyone living in Hanoi knows too well, the city is gradually being choked by traffic. It’s been going on for some time now, but the traffic situation has deteriorated at intensified speed in recent years. Air pollution is already at alarming levels, worsened significantly by ever more frequent traffic jams. Hanoi appears destined to follow in the polluted footsteps of other Southeast Asian capital cities, infamous for their gridlocked streets, where inhabitants spend significant parts of their days inside slow-moving private cars.

Can this scenario be avoided? There is of course no easy solution to the situation. The investments in new public transport infrastructure are certainly a major step in the right direction. It will not be enough, however. Even optimistic estimates expect that the MRT and BRT systems combined will only be able to meet 25% of the total transport demand of Hanoians. With an urban population with increasingly more money to spend and both a need and desire to be mobile, it is obvious that additional measures need to be taken.

I will not claim to have the final solution. But based on experience from other cities and many years of research on traffic in Hanoi, I believe the following three suggestions would make a significant impact.

First of all, make Hanoi bicycle-friendly again. The city has a proud history of bicycling, and most Hanoian households still own a bicycle. There is a wide range of reasons why bicycles have gone out of favor. Comfort, convenience, status and safety are important factors that explain why Hanoians moved on to motorbikes, and are also important reasons for why many have now started buying cars. However, many Hanoians still appreciate bicycles, something that is visible in the current trend of cycling around Ho Tay and other places in the city on (often expensive) bikes for exercise. The challenge is to make the bicycle a viable means of transportation as well. Experience from other cities shows that to do so, it’s not enough to tell people they should be cycling; bicycles must be prioritized through bike-friendly infrastructure. Through my research, I have met many Hanoians who say they would like to use their bicycle, but that they do not feel safe in the heavily congested streets. What we see is a negative spiral, perhaps most vividly illustrated by people who drive cars to avoid air pollution.

Second: Stop fighting the motorbikes, embrace them. Widespread motorbike ownership is after all the main reason why mobility levels in Hanoi are still relatively good. Motorbikes are remarkably efficient and play a crucial role in making this city work. And even if the worst motorbikes may pollute more than the best cars, they do not clog up the streets in the same way. That being said, I fully agree that the pollution from motorbikes must be reduced. I believe a solution here could be to introduce incentives for changing old motorbikes for electric scooters. And I don’t mean the bicycles that school children are already riding, but proper e-scooters that can compete with traditional petrol-driven motorbikes. Who knows, it could even become an appropriate new product for Vietnam’s current industrial aspiration. It would require some investment in infrastructure for charging, but I believe this is doable.

Third: Make more streets car-free, and be stricter with the enforcement of car-free zones. I know this one may turn out to be the least popular suggestion, further strengthened by the fact that it is only the richest that can afford cars. But I believe it is absolutely necessary. Close to every time I experience a complete halt in traffic in Hanoi, it’s caused by a car entering a narrow street, making a very slow U-turn, or stopping to let passengers off. I have sympathy for car drivers, since I know it’s not easy to drive a car in Hanoi, but they simply cannot be allowed to enter narrow streets. I fully understand that this is a very hard policy to implement, but it is one that I believe must happen.

None of these three steps are simple. They require bold policymaking and long-term planning. Some may also claim they are utopian and naïve. I strongly disagree with that. They are rational solutions to a major problem. And, if implemented, these policies would make Hanoi a greener and more livable city that could be a source of inspiration for other cities in the region. Hanoi bicycle city. Imagine that!