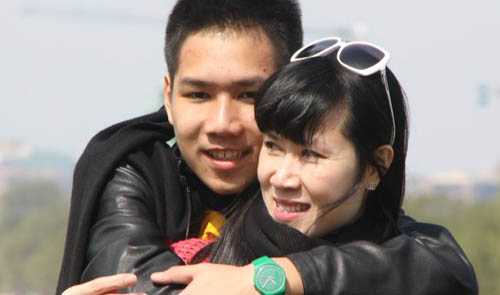 Flight attendants in Vietnam: Love in the air

Flights have helped air hostesses and their male colleagues and regular passengers become couples, but they have also led husbands and wives to being separated thanks to the distance and lack of time.

Airlines in Vietnam, such as state-owned Vietnam Airlines and low-cost carriers Jetstar Pacific and VietJet Air, have many couples working for them as flight attendants.

Thu Ha, a Vietnam Airlines air hostess, fell in love with a male colleague, Yen Son, 12 years ago when they met each other by chance at Tan Son Nhat International Airport in Ho Chi Minh City.

The airport and the love port

Thu Ha recalled that she met the man who is now her husband sometime in the airport while both were preparing for their flights.

Shortly afterward, while on an international flight to Dubai, one of her female colleagues slipped a handwritten letter into her hand.

The letter was signed by Nguyen Yen Son.

It asked some normal questions such as, ‘Are you tired after flights?’ and ‘How’s your food today?’

“It was a lovely letter,” Ha said.

Busy with flights, he ‘resorted’ to using the airport as his ‘love port’ and sent letters to Ha before or after every flight via one of his friends, who is also an air hostess.

Son prepared food he knew Ha enjoyed and sent it to her before every flight.

When he had time, he picked her up at the airport after her flight and gave her a bouquet of white flowers.

These actions caused Thu Ha to ‘collapse,’ and she began pairing with Yen Son more regularly because she ‘felt safe.’

They married in 1997 and had a son the following year.

“It is more difficult for stewards and stewardesses to keep loving each other because we don’t have time to stay together,” Ha admitted.

Now, Ha and Son are chief flight attendants and Son is also a lecturer in flight safety.

“When we go to work, we send our son to his grandparents. Since they are far from their parents, the children of flight attendants are often more independent,” she said.

Ngoc Linh, 30, is an example of love between air hostesses and male passengers.

Linh remembered that she fell in love with a passenger when she was in charge of the VIP cabin of a flight.

The passenger expressed his sentiments and Linh challenged him, “We can keep in contact with each other if you fly with me four times by chance like this.”

He was determined and tried to befriend a worker at Tan Son Nhat International Airport so he could learn about Linh’s flying schedule and completed the challenge.

They had happy time with each other, but it was the distance and Linh’s frequent flights that caused them to eventually separate.

Many air hostesses flying regular international flights lead single lives because they have no time to hang out with people of the opposite sex.

Stewards and stewardesses often stay in the same hotel after international flights, and it is this short time spent overseas that gives them both chances and challenges.

Fellow flight attendants have time to stay with each other in the same place, but it may cause their partners to misunderstand if the partners are not working in the industry, many air hostesses said.