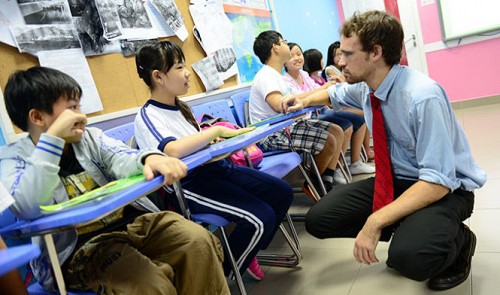 Expat teachers in Vietnam – Part 1: The story of Robert Ackley

Editor’s Note: Robert Ackley, 27, who currently teaches at ILA English Language Center in Ho Chi Minh City, said half-jokingly, “The American dream is dead so I’m chasing the Vietnamese dream.” Ackley tells the story of why he came to Vietnam to be a teacher and shares his impressions of the country.

Left home thanks to wanderlust

A year and a half ago I was in Boston working for a library storage facility. Basically, we had a warehouse that would temporarily hold books for libraries that were moving or being renovated. Most of my time was spent slouched in a chair scanning barcodes of old books into a catalogue that seemingly had no end. Occasionally I would snap photos of particular titles of interest, but this work was far from fascinating and anyone with fingers and thumbs could do it.

It was cold, there was snow, it was Boston. I swore that every winter I spent in the Northeast of America would be my last. I remember the final weekend at home before coming to Vietnam there were back-to-back storms that caused so much chaos on the roads that the city issued a driving ban. It was actually illegal to drive your car and anyone caught driving could be subject to arrest! It was also illegal to park on the streets so people were forced to shovel out spots wherever there was room, which became pretty creative. Aside from the unique experience of walking down the middle of an empty three-lane road in the strange quiet of a blizzard, I was done with these winters and tired of this weather.

While the weather was at times unbearable, it was not the driving force behind my decision to move abroad. Rather, it was the monotony of a string of jobs that all fell far from any career path coupled with a bit of wanderlust.

When choosing where to take the CELTA [Certificate in Teaching English to Speakers of Other Languages] and in turn where to live, I had a small set of criteria in mind: cheap, different, exciting. Vietnam seemed to satisfy my criteria, but I’ll be honest, I didn’t really know what I was getting into prior to coming here, and how could I?

The American man now gets used to the traffic culture in Vietnam and enjoys driving his motorbike. Photo: Robert Ackley

There were other places I could have chosen to live that would have afforded me a more economic life. Places like South Korea, Taiwan and Japan are all destinations that offer comparable if not better compensation for teachers than in Vietnam. However, there was a certain mystery shrouding my perception of Vietnam, and this was ultimately what drew me in.

Sure, I did my homework by reading about the culture in Vietnam, I browsed teaching forums to try to gain insight into the expat way of life, and I learned the Vietnamese numbers on the plane, but I’ve always found it best to keep expectations minimal as they’re too easily shattered, especially on the other side of the earth.

The salary provided from teaching is ample enough to live and can provide some savings, but most teachers quickly turn it over to finance their travels. With Vietnam offering diverse landscapes and easy access to the rest of Southeast Asia, it’s hard to let the money pile up when a week-long trip to Thailand or Cambodia is more than feasible, and well within our budgets at that. I’ve managed to visit Thailand, Cambodia and Laos during my 16-month stay in this region and I’m sure I’ll visit a few more places. I will say though, no country has impressed me more than Vietnam.

At the time my teaching experience was limited, but I had taken an online TEFL course and had also volunteered to conduct one-on-one speaking classes with adults at a non-profit language center. This, to me, was not enough. I started shopping for CELTA courses, which would provide a month of training as well as hands-on teaching experience, which I lacked.

The CELTA course in Ho Chi Minh City was my life for the first 30 days I was here, but proved to be worth the time and effort. With a college degree and a fresh CELTA under your belt, a plethora of options will become available to you. It really comes down to you and what exactly you want to do. Some teachers choose to work at language centers, which are heavy on weekend hours, while others value their weekends and keep to public school schedules during the week. For those with the necessary skills and experience there are international schools and universities, which offer more competitive salaries.

Deciding to wave my weekends goodbye, I took a job at a language center, which has proved to be rewarding in more ways than one.

Teaching, while sometimes maddening, has turned out to be good fun the majority of the time. Sure, there are young students who consistently try to thwart my lesson plans, but there are also management systems created to tame these mavericks and replace their mischief with inspiration. I’ve found these young learners to be the most inspiring to teach as they learn so fast and possess such pride and excitement in their new knowledge.

Teenagers can be shy and “too cool” sometimes, but they just need their interest sparked by content that is appealing to them. Once they’re comfortable around you it’s easy to find classroom conversations going in all different directions. With any class, time creates comfort, rapport is built and soon you know how to tailor your lessons to fit your students’ needs. It all gets easier from there.

The chaos in Vietnam was visible in photos and videos of the traffic, but what remained of a long, complicated history of struggle and war was unknown to me. However, signs of vitality and spirit seemed to be swarming in the economic hub of Ho Chi Minh City.

My first reaction to the city upon arriving was “Uh, I can’t live here.” This thought raced through my mind as I tried to cross the street with little success. The sheer volume of people present in Southeast Asia was the hardest thing to cope with in my first few months.

After teaching in Vietnam for a little while, it’s easy to realize that free time is not hard to come by. I work about 20 hours a week, spend 4-8 hours a week planning, and the rest is mine. I try to fill those extra hours by skateboarding around the city, playing soccer, reading, and going out for drinks sometimes. Occasionally, I go bowling too. However, I have met some foreigners who have trouble finding hobbies in a place that lacks the comforts of home. Jogging, for example, quickly becomes a chore if you don’t live in close proximity to a park. Similarly, outdoor enthusiasts may have a hard time finding a hike anywhere nearby. These are the disadvantages of living in a big, crowded, sprawling city.

Like anything though, there are advantages to living here as well. Those of us coming from the West are blessed with the cheap prices of almost everything and minimal bills. For me, transportation and food come to mind, not to mention the endless restaurants with different varieties of international cuisine. Here we also live amongst a friendly population of locals who are quick to lend you a hand when your motorbike won’t start or point you in the right direction when you are lost in Go Vap District.

The city has a certain charm and maybe that’s what keeps some of us here. For many though, they have the urge to keep moving, and that’s the sadness that comes with teaching. Contracts always come to an end and friendships are fleeting. However, the wheel keeps turning and new teachers come to give the city a go. This is the nature of the beast. Some will stay and some will go. As for me, I can’t say, but I’m here for now.