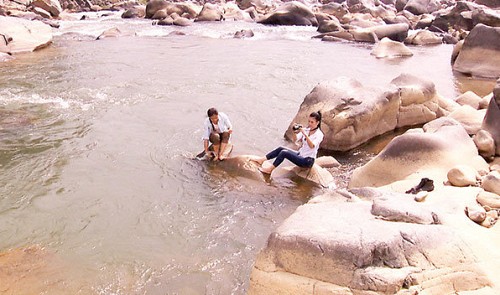 Recently, more directors of Vietnamese dramas and movies have paid greater attention and resources to improving their films’ images and storylines to attract viewers.

Though on a limited budget, several directors of TV dramas have recently dedicated more time, energy and funds to providing their films with stunning settings, which aren’t restricted to indoor or cliché settings.

Some have also made film adaptations of noted literary works in the hope of enhancing the appeal of their storylines.

Many viewers have expressed their delight and surprise at the incredible scenery in “Dau Chan Du Muc,” (Nomadic Footprints), a TV drama which is airing at 9.20pm every Monday and Tuesday on national broadcaster VTV3.

“The film treats viewers to non-cliche camera angles and picturesque landscapes, though on a closer look, the scenery sometimes repeats itself,” Tran Tien, a viewer in Ho Chi Minh City, commented.

Meanwhile, “Loi Thi Tham tu Qua Khu” (The Whispers from the Past), which is also airing on VTV3, has sent chills down viewers’ spines with its many ghostly scenes.

Several other dramas including “Doi Thu” (Contenders), “Quyen Ru” (Magnet) and “Song Gio Hon Nhan” (Nuptial Ups and Downs) also appeal to viewers, though there’s nothing out of the ordinary about their storylines.

“I believe cinematography is one of my film’s pluses. Instead of letting characters have conversations at cafes, restaurants or pubs as usual, I put them in natural scenes such as quarries and ponds,” shared young director Truong Quang Thinh about his film, “Quyen Ru.”

Director Mai Hong Phong, who has produced several TV dramas, urged local directors pay due attention to cinematography, as it is decisive to the makers’ hallmark values and can also help enhance acting and dialogue.

“In my opinion, almost 50% of a TV drama or movie’s success depends on its cinematography and sound. Previously, our inadequate TV drama technology kept us from having good cinematography. But today’s filmmakers should make the best of hi-end technology to cater more to the visual tastes of viewers,” said Do Thanh Hai, director of the Vietnam Television Film Centre (VFC).

Generally limited by a limited budget, TV filmmakers have to work hard to balance their expenses.

“We hired two planes with flycams for aerial shots. One of our strengths is having the equipment on hand. We probably couldn’t afford the cost if we had to hire them on a daily basis,” said Nguyen Quang Tuyen, producer of “Dau Chan Du Muc.”

The film crew and cast was then cut down to 10 members, who disguised themselves as tourists and captured the landscape on their personal cameras.

Director Quang Thinh took his crew to his home for nice, inexpensive shots.

While the creators of TV dramas are paying more attention to their cinematography, the directors of at least 10 of this year’s big-screen Vietnamese movies have adapted plots from literary works to enhance their poetic quality, profoundness and appeal.

The film has been adapted from an eponymous book by Nguyen Nhat Anh, a much-loved children’s author.

Meanwhile, director Cuong Ngo’s “Huong Ga” (Her Rise and Fall), which is being screened at cinemas nationwide, is an adaptation a novel titled “Phien Ban” (Versions) by local author Nguyen Dinh Tu.

“Quyen,” which features both local and foreign actors including Gary Daniels from the U.K. and Tran Bao Son and Vu Ngoc Anh from Vietnam, was introduced at the Japan Content Showcase 2014 in October in Tokyo.     While “Nuoc” (2030) - an internationally-acclaimed movie by expat Vietnamese director Nguyen Vo Nghiem Minh - is based on a short story by emerging Vietnamese author Nguyen Ngoc Tu, “Diu Dang” (Gentle) by director Le Van Kiet is adapted from the short story “A Gentle Creature” by Fyodor Dostoyevsky- a revered Russian author.

“Doi Nhu Y” (A Happy Life), which is being made by expat Vietnamese director Vuong Quang Hung and is slated for completion by the end of this month, is based on another story by Nguyen Ngoc Tu.

“Acclaimed literary works already have their own appeal, profoundness and the capacity to arouse readers’ imagination, so directors can tap into them to make good films,” Son noted.

Producer Jimmy Nguyen, of Chanh Phuong Films, said his company is always on the lookout for quality literary works which they can adapt into films.

“Literary works, which are the movies of authors, provide filmmakers with the psychological twists of the protaganist, settings and dialogue, among other aspects. All we need to do is further enrich the values,” Nguyen noted.

Seasoned scriptwriter Nguyen Thi Minh Ngoc pointed out that several recently-made films, especially those written by the directors themselves, have numerous shortcomings, particularly when it comes to dialogue.

Meanwhile, scriptwriter Nguyen Manh Tuan raised his concern that movies, which are only 90-115 minutes in length and cater to audiences’ tastes to earn profits, can undermine the intrinsic values of long literary works.