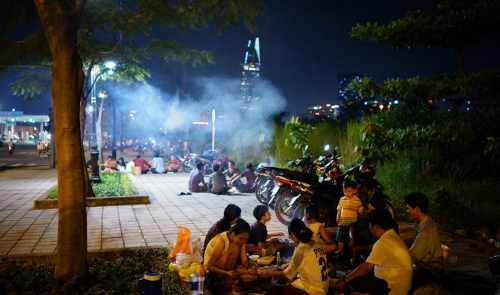 Lacking parks and open space for relaxing in a natural environment, residents in Ho Chi Minh City, mostly young people, have recently selected the newly-built Mai Chi Tho Boulevard in District 2 as a ‘rendezvous’ for going for a picnic every night.

The large sidewalks of the boulevard, which connects the Thu Thiem Tunnel under the Saigon River to the Hanoi Highway, have become even more crowded on hot and dry days.

The road has large pieces of grass or empty land on both sides that provide space for them to sit together.

At night, picnic-goers can also enjoy the river view and the bright buildings downtown on the opposite bank of the Saigon River, at the section near the Kenh 1, 2 and Ca Tre Nho and Ca Tre Lon Bridges.

Every night, thousands of people go in groups and flock along the street with food for barbecues.

A group of five young men and four women said it cost them VND457,000 (US$22) to prepare food for a picnic party that lasts several hours at night.

The cost covered a kilogram and a half of pork, 30 Vissan sausage pieces, two kilograms of okra, 10 loaves of bread, 10 Saigon beer cans and five water bottles.

Ten beer cans for five men are enough for a small picnic party, said Thanh Tam, a member of the group.

“This is a picnic, not a drinking party,” she added.

Regular picnic-goers in the area include students, blue-collar workers from nearby construction sites, office workers and even families.

From 7:00 pm the most popular section of the street near the bridges and the Saigon River often becomes filled with people before the crowd spreads to other sites.

Besides food, many groups bring a guitar with them.

The ‘picnic land’ on Mai Chi Tho often gets quiet at 10:00 pm because this is when the Thu Thiem Tunnel closes to motorbikes.

Besides the open space and the nice views on Mai Chi Tho, the boulevard has also become a ‘rendezvous’ for picnic goers because it is a safe place.

Oftentimes a new, wide street is marred by speeding and illegal bike races, but this is different because it does not have many intersections and thus cannot ‘facilitate’ illegal bikers in fleeing from a police raid.

Senior Lieutenant Colonel Minh Hung said, “We traffic policemen organize permanent patrols on the street and in the surrounding area.”

In the presence of young people lawfully enjoying their free time, they do not allow violators to rule the site, he added.

However, the downside of these ‘rendezvous’ is that a small number of picnic-goers litter in the public space, badly affecting the site and bothering garbage workers.

On the night of November 7 on the Ca Tre Nho Bridge, a group of young people gathered to chat and drink.

One young man surprised the others by taking off his trousers, exposing his underpants around his hips.

A girl from the group stood up to leave. She was followed by one, and another, until the entire group left, except for the young guy.

The girls reported that they knew him via chatting on the Internet, and it was the first time they had met him in person.

A small number of couples like visiting the area too, but not to enjoy the picnic atmosphere with the smell of barbecue and other food. They come and choose a quiet space to sit close to each other and look at the lit-up and loving atmosphere ahead.

More and more people are finding their own way to enjoy the atmosphere on Mai Chi Tho these days.