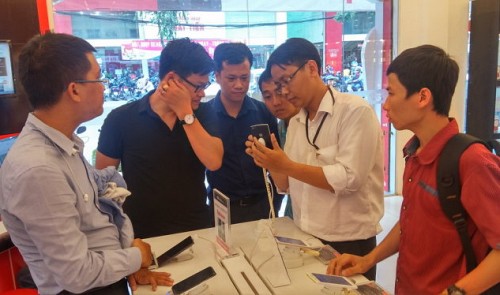 An executive of the security firm-turned-smartphone maker Bkav is confident its flagship Bphone can even challenge Apple or Samsung on the global stage, despite its rough journey to win over local users. Bkav, a Hanoi-based firm well known for its namesake antivirus software, took the wraps off its Bphone during a lavish ceremony in the Vietnamese capital on May 26, and began selling the handsets online only a week later. While those who ordered the Bphone during the first day of sales have yet to have their purchases delivered, a top Bkav executive has said the company is working with international network carriers to enter the global market. “We are working with carriers in the U.S., India, Singapore, and Malaysia to boost the entrance to the world’s market,” Vu Thanh Thang, deputy president of hardware with Bkav, told Tuoi Tre(Youth) newspaper on Saturday. “We are hoping to be able to sell millions of products next year.” Thang said the Bphone is strong in both software and hardware, whereas Apple and Samsung only have strength in one of the two fields. “Apple is good at hardware for its products, but their software is closed,” he said, apparently referring to the fact that Apple’s iOS is not developed from open source codes. On the other hand, Samsung uses the open-source Android but their hardware is “just normal,” the Bkav official said. “Bkav’s Bphone has a meticulously made design, great hardware, and its self-developed operating system, BOS.” Thang also told newswire Kinh Te Do Thi (Urban Economy) that Bkav targets to “compete with leading smartphone makers such as Apple and Samsung” in the world arena. “To this end, Bkav must produce one of the world’s best smartphones,” he added. The Vietnamese company will thus not try to win the global market with a cheap price policy, Thang said in both interviews with Tuoi Treand Kinh Te Do Thi. “We will be unable to perfect every single detail for the phone and adapt all of the latest technology if we are to make a budget handset,” he said. “This will reduce the user experience with our product.” Bkav said it received 11,822 orders on the first day of sales on June 2, far higher than a modest estimate of 5,000 devices. The lowest price for a Bphone is VND9.99 million (US$455), a 16GB black version. With a 10 percent value-added tax and a VND200,000 ($9.2) shipping fee (for buyers living outside Hanoi and Ho Chi Minh City) counted, the handset costs more than VND11 million ($505). Vietnam’s GDP per capita is now about $2,000. Bkav said those customers who placed orders on June 2 will receive the products, delivered to their doors, early this week. Series of scandals On June 5, Bkav began displaying demo versions of the Bphone at two FPT Shop mobile phone stores, one each in Hanoi and Ho Chi Minh City, for users to have first-hand experience of the products. However, on Monday, the company suddenly removed these devices from shelves, apparently because they have received negative comments from those who tested them out. The devices on display are not the commercial version of the Bphone, so they failed to win over users, newswire ICTNewsreported the same day. The demo versions reportedly have screens with poor display and slow performance quality that is even lower than some low-cost handsets, according to the newswire. “These demo versions were recalled for upgrades, as per a request from Bkav,” ICTNews quoted an FPT Shop representative as saying. The recall of the demo products is the latest scandal to hit the Bphone, which Bkav CEO Nguyen Tu Quang told a 2,000-attendee launch ceremony is “the best smartphone in the world.” Shortly after the Bphone launch, Bkav was criticized for equipping a Chinese satellite navigation system known as Beidou on the handset. Some Vietnamese users were concerned that the Beidou might track their phones or steal their personal data. But local tech experts have reassured members of the public, saying Beidou is only a kind of global positioning system technology similar to the popular GPS and GLONASS. Some members of the local tech community are also skeptical about the manufacturing plant of Bkav, saying the phone might have been produced in China. But Thang asserted to Tuoi Tre that the Bphone is being produced at a Bkav plant in Cau Giay District of Hanoi. “The Cau Giay facility is capable of making dozens of thousands of products a month,” Thang said. The Bkav executive added the company has also completed infrastructure development for a 2.3 hectare land plot at the Hoa Lac Hi-Tech Park in the capital, and is ready for the plant relocation to have a larger capacity. “We are planning to invite the media to tour our smartphone plant in the next few weeks,” he said. 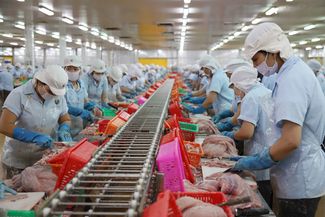