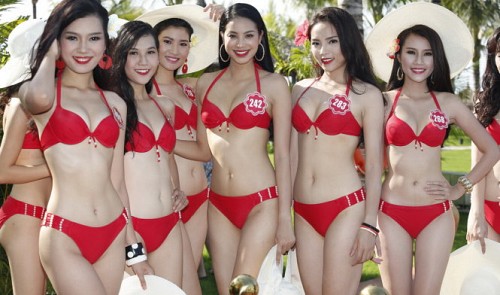 “Should bikinis be made compulsory for beachgoers?” has recently turned into a hot topic of discussion after it was mentioned at a meeting in Da Nang, a city located in central Vietnam.

At the 14th session of the People’s Council of the coastal city on July 9, local authorities talked about tourism development.

Ngo Quang Vinh, head of the Da Nang Department of Culture, Sports, and Tourism, said that the city has received lot of compliments from tourists for its clean, beautiful and low-cost serviced beach.

However, Vinh also mentioned that several foreigners have complained about many Vietnamese people wearing sleepwear to the beach “instead of bikinis,” and wondered if there should be a regulation which would require beachgoers to wear the two-piece swimsuits.

The idea then triggered a discussion between those who say yes to such a regulation and the other side, who thinks it is not suitable in the Vietnamese context.

Some even said that wearing sleepwear to the beach is “progress” as many Vietnamese people still go to the beach fully clothed.

Watch out for your pajama pants under water!

It seems that sleepwear is not an ideal outfit for a number of ladies who expressed their support for keeping the clothes, meant for home, away from the beach.

“I once saw a young man stuck in an awkward moment as waves whipped his large sleep pants away,” Mai Hoang Oanh, 22, from the central coastal city of Nha Trang, recalled her bizarre story with Tuoi Tre News. “He then had to stay still and look for his pants so he could step out of the water.”

Meanwhile, 25-year-old Nguyen Mai Anh from Da Nang, who works in Ho Chi Minh City, said she completely agrees with the idea of not wearing sleepwear to the beach.

“It’s unacceptable to wear pajamas for swimming,” Anh said. “They will stick to the body when they get wet and look ugly and dirty.”

Nguyen Kim Thuy, who works at a resort in the south-central resort town of Mui Ne, also said she is against people wearing bedroom clothes on the beach.

“Wearing sleepwear on the beach is not something people should do,” she said. “Clothes for home are meant to be worn at home, how can people display them on the beach?”

Diem Le, who lives in Ho Chi Minh City, understands why some foreigners would be annoyed after seeing people put on sleepwear on the beach.

She said it is due to differences in terms of the mindset and culture.

“They are taught to wear bikinis to the beach from a young age, so they must be annoyed seeing someone wearing sleepwear,” she added.

On the other side of the story of what to wear to the beach, the bikini has also received mixed opinions.

“It’s normal to wear a bikini on the beach because it’s comfortable for activities there and under water,” Thuy said.

“To many young women, wearing bikinis is no longer a big deal, but we shouldn’t force people to wear the costumes on the beach,” Ho Chi Minh City resident Nguyen Ngoc Dung said. “It should be a regulation on what not to wear to the beach.”

“It could still be T-shirts and shorts, as long as it’s not too scruffy and still polite enough,” she added.

According to Da Nang resident Anh, wearing bikinis on a beach does not go against Vietnamese traditional customs.

“It depends on the place you are at, you should choose appropriate clothes to put on,” Anh stated. “But I think the word ‘bikini’ hasn’t sounded reasonable enough. Not putting on sleepwear doesn’t mean only wearing bikinis. It could be other kinds of swimsuits.”

“There are now many kinds of swimsuits,” she added. “I am a shy person and am not very confident in my body, and I have found myself an appropriate swimsuit in which I feel comfortable.”

“Many people often think about two-piece swimsuits. However, there are many types of bathing suits, so maybe we should give them more information about this to gradually change their mindset before officially proposing any regulations that may cause disputes,” she said.

However, Diem Le, the Ho Chi Minh City resident, also expressed concern over the negative side of wearing a bikini.

“It would be a good opportunity for some people to wear inappropriate and overly sexy bikinis, and when others, especially older people, look at them, they will feel annoyed,” she said. “I like bikinis but they should be appropriate, not too sexy.”

Have you ever been dismayed by people wearing sleepwear to the beach? Do you think that requiring people to only wear bikinis would help improve the image of the beach? Ladies, are you against or for bikinis? Do not hesitate to share your stories with us in the comment box below or email them to ttn@tuoitre.com.vn.