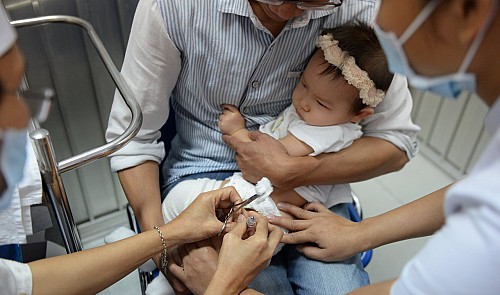 Vietnamese Minister of Health Nguyen Thi Kim Tien has insisted on the use of a free 5-in-1 vaccine, which has been blamed for many deaths of children after injection, against the backdrop that an alternative is increasingly preferred by local parents due to its safety.

The complimentary Quinvaxem vaccine, made in South Korea, is stronger than its costly alternative Pentaxim even though the former may bring more mild allergic reactions, Health Minister Tien told Tuoi Tre (Youth) newspaper.

Quinvaxem cannot cause more serious complications that may lead to fatality than Pentaxim, the official confirmed.

The reactions include light fever or coughing as children’s bodies are still sensitive at early ages, Minister Tien said.

Regarding many cases in which children died after being injected with the free vaccine, Minister Tien stated that all types of vaccine pose a small possibility of fatality, adding that the common rate of death is one to four in a million shots.

There are three main reasons that may cause children to die after being immunized with Quinvaxem shots.

“The first is anaphylaxis which has a low probability of occurrence but inevitable. The second is that a lack of proper treatment for the less severe cases of anaphylaxis leads to fatalities. And the third arises from the fact that babies have already developed some kinds of illness before getting a shot, including congenital heart disease, immune disorders, genetic diseases, and others,” Minister Tien elaborated.

Many parents have been petrified as they constantly read articles about the deaths of children after getting the Quinvaxem immunization without a proper understanding of the real cause, according to the minister.

Thousands of children will be susceptible to the deadly diseases Quinvaxem is meant to fight, of whom hundreds will be killed, if they do not receive the vaccination on time, she insisted.

The reason why many countries use the Pentaxim vaccine instead of Quinvaxem is they have long been applying the acellular technology, which is used to produce Pentaxim, Minister Tien explained to Tuoi Tre reporters.

In 2014, the Ministry of Health considered substituting Quinvaxem with Pentaxim and consulted many health experts in Switzerland, according to the minister.

However, the specialists agreed that the substitution was not possible due to the high cost of the Pentaxim vaccine and a dearth of supply.

In addition, the more children Pentaxim is used on, the higher the possibility of fatal complications, Minister Tien said.

“The death rate caused by Pentaxim would be similar to that by Quinvaxem. People would begin blaming it on the new vaccine. How would we be able to explain?” she said.

In response to the Vaccine Alliance (GAVI) decision to cease the supply of Quinvaxem to Vietnam in the next three years, the official said that the Ministry of Health is trying to figure out a way to produce the vaccine.

It was first included in the National Expanded Immunization Program in June 2010.

Pentaxim, which is a French-made alternative to Quinvaxem, is thought to be safer and increasingly preferred by Vietnamese parents, following multiple cases in which infants died after being injected with Quinvaxem.

Pentaxim is costly (at around US$27 per shot) and low in supply, causing challenges for many parents to get the shots for their kids and leading some of the families to take their children to Singapore for such immunization.