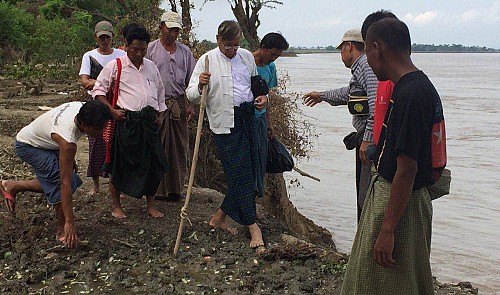 Who is Htin Kyaw? – Part 3: A president without shoes

No one ever expected a grey-haired man, with his feet covered in mud, one who sat silently with an elderly flood victim on a ferry in October last year, to become Myanmar’s head of state.

Without fanfare, newly elected President Htin Kyaw has been helping needy people across the country since 2012.

Everywhere he goes, he wears a white shirt, a Myanmarese longyi, and a cotton jacket.

Htin Kyaw, 69, a man who grew up behind bookshelves, is a keen student of literature and loves beautiful poems. He has witnessed first-hand the needs of the people on nationwide aid trips he has taken part in since joining the Daw Khin Kyi Foundation.

The purpose of the foundation is to promote the health, education and living standards of Myanmar’s people, focusing its attention especially on the needs of the country’s least developed areas.

The foundation’s head office is located in Yangon and is managed by an executive committee headed by the chairperson, Aung San Suu Kyi.

It does face a shortage of human resources, with only two people taking on full-time duties, according to Ohn Mar Moe Myint, one of the executive board members of Daw Khin Kyi Foundation.

Consequently, Htin Kyaw has taken the task of going around the country, observing needy people and handing out humanitarian aid for refugees with his own hands, Ohn Mar Moe Myint said.

“The two of us, Htin Kyaw and I, take full responsibility. We only have seven people, including office staff. We two are managing everything,” he added.

While the idea of the foundation comes directly from Aung San Suu Kyi, Htin Kyaw and Ohnmar Moe Myint are those who actually run the foundation.

“Sometimes, we do not sleep all night. The updates keep buzzing on the phone,” said Ohnmar Moe Myint.

Another of the NLD members, Myint Thein, has joined Htin Kyaw on some trips.

“He is always ready to go anywhere as soon as he got news from the ground,” said Myint Thein, who lives in Yangon.

Htin Kyaw’s role is more about going out to the fields and taking care at ground-level. Whenever he engages with people, the quiet man Htin Kyaw becomes a good listener to their needs.

In late February this year, Htin Kyaw walked without shoes in Ayeyarwaddy, a muddy landscape one hundred miles away from Yangon, to see with his own eyes the lake which has almost dried up.

He has walked and taken cow carts to provide assistance in the places where water is extremely rare.

“We only know he was sent by Mother Suu’s foundation. When his boat landed along the riverbank, the ground was so muddy and slippery. We tried to hold his hands to help him to walk, but he did not take anyone’s help, he made it on his own,” said U Sein Maung, a 56-year-old local farmer who accompanied Htin Kyaw on the visit.

San Thar, a 63-year-old man from Dayin Kouk, a village 20 miles away from the Irrawaddy division, also met Htin Kyaw on his trip.

San Thar noticed that Htin Kyaw, a tall, grey-haired man who held aid money in his arms, was very gentle in every move.

In mid-2015 the Daw Khin Kyi Foundation was at the center of relief efforts as Myanmar was hit by the worst-ever flood. The foundation was able to provide help during both the flood and recovery period.

One of the foundation’s trips led by Htin Kyaw was to the western state of Chin, where locals face serious landslides, and villages have been destroyed. The foundation has donated solar boards to students in the non-powered areas in Chin so that they could continue their studies.

Htin Kyaw also reached the state’s worst affected areas, such as Hakha Lay Township, where a whole village was destroyed by a landslide.

“The villagers felt teary and delighted as they no longer have to stay in the dark at night,” said Saung Chin Htoo, a school teacher in Tidam.

Saung Chin Htoo added that they were glad to see the man who gave them light become the president.

Besides being involved in the humanitarian sector, the Daw Khin Kyi Foundation also runs a vocational training center, where youths from around the country can learn about hotels and tourism. They also implement an organic farming model at the center.

In addition, the foundation offers immediate response to such emergency situations as fire, flooding and other natural disasters.

In February, Htin Kyaw delivered emergency relief aid to families hit by fire in the southern state of Mon.

Mann Thar Aung, from Karen State, shared his experience of meeting Htin Kyaw, after fetching him from the airport in Mon.

“He told me: ‘No need to fetch me at the airport, it is wasting time. I could come to the disaster area myself’,” Mann Thar Aung said.

Mann Thar Aung continued, “He looks quite familiar with people. He is quiet and listens to people from the ground.”

While Htin Kyaw began involving himself in charity work as an executive board member of the foundation in 2012, there is no official record of his work in the field in the same year. All records began in 2013, though there is no record of exactly how many miles or how many trips he has taken so far.

Some charity workers now hope that the president will stay involved in social work to encourage charity foundations to help needy people in the country.

In Thein Sein’s era, some social workers were arrested in the disaster areas.

“If I have a chance to see him, I will ask for social workers to be able to work freely in any part of the country,” said Myint Hein, a 24-year-old volunteer social worker for street children.

“We do hope he will help our work to thrive.”

The hopes of 60 million people are now on the shoulders of Htin Kyaw, the first-ever non-military-backed president after five decades of totalitarian regime.

Unlike charity work, ruling a country still listed amongst the poorest in Southeast Asia is more challenging.

While it is said that Htin Kyaw may be a puppet of Aung San Suu Kyi, the common people, like San Thar, believe in his own personality.

“It is true that he is not active in political affairs, but even so you can’t say he might not become a good president,” San Thar said.

“I believe in him. He will rule our country with his heart and I hope he will deliver us a better future.”