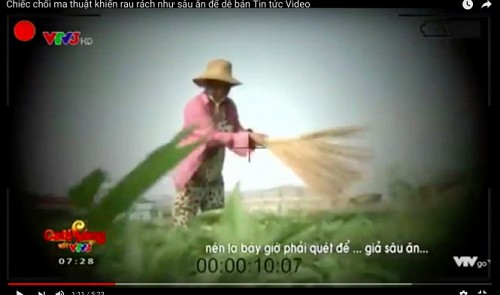 Vietnam’s state broadcaster has issued a public apology and suspended one of its reporters for fabricating a TV report accusing farmers in a northern province of using dishonest tricks to grow pesticide-free vegetables.

Vietnam Television (VTV) said in a press release late Wednesday that Pham Thi Phuong, an intern reporter, had been suspended for “unethical journalism” in producing the made-up story.

The coverage, titled “The Broom That Sweeps the Vegetables,” was aired during the May 3 daily morning show on VTV3 and intended to raise a false alarm on a dishonest trick farmers in Vinh Thanh Commune of Vinh Loc District in Thanh Hoa Province use to grow veggies.

The report says farmers in the area use coconut brooms to sweep over the vegetables, leaving holes in their leaves to make them “look as if they were destroyed by worms,” implying that they used pesticides in the cultivation process but did not want consumers to know.

Strange as it may sound, many consumers in Vietnam believe vegetables with perfect green, undamaged leaves are grown using insecticides.

Even when vegetables look great, traders are afraid they are unappealing to skeptical consumers.

Consequently, some will try to make their vegetables look as if they were slightly attacked by worms to assure buyers that no pesticides are used.

The VTV reporter attempted to take advantage of the consumer mindset to produce her coverage.

The reporter also interviewed a farmer, who admitted that he adapts the ‘broom method’ to dupe consumers.

In an apparent bid to increase credibility, two presenters said that their parents also buy vegetables that show signs of pest damage as “they look natural and might not contain pesticide.”

VTV interviewed several consumers as well, who shared the similar views in choosing what they believe are clean vegetables: the more the produce looks attacked by worms, the safer it is.

Shortly after its May 3 broadcast, the report ignited a wave of outrage amongst veggie farmers in Vinh Thanh Commune, who said the made-up story had hurt their business.

On Wednesday, Vu Thi Huong, chairman of the Vinh Loc District administration, told Tuoi Tre (Youth) newspaper she had been briefed on the incident from the commune’s authorities.

According to a report, Huong said, on April 30 three people identifying themselves as VTV reporters came to the commune’s Cao Mat Village to film a local vegetable farm.

The three reporters never contacted the local administration in advance, Huong said, adding she does not know “for what purpose they fabricated such a story.”

The reporters brought filming equipment and asked some locals to ‘act’ in the video, Huong said.

On Tuesday, the three VTV employees returned to Vinh Thanh Commune to apologize to the affected farmers.

However, Cao Mat villagers did not accept the apology, requesting that VTV produce another report to rectify the false information and truly demonstrate how Cao Mat farmers grow vegetables.

The administration of Vinh Thanh Commune is calculating the exact material damage farmers have suffered after the report was broadcast.

“We will report to the provincial administration and lodge a complaint to VTV,” Huong added.

The apology meeting was filmed by some local farmers and later shared online, putting heavier public pressure on VTV to issue the public apology and suspended the reporter involved.