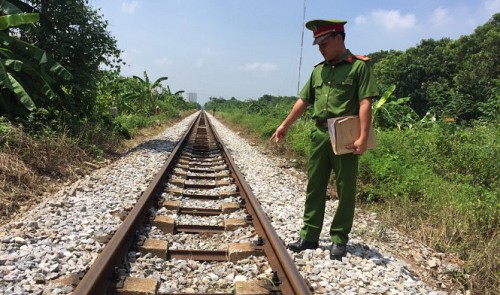 A Hanoi resident was willing to live with only one hand and one leg, in an outlandish attempt to defraud her insurance company and claim a huge compensation settlement, but her extreme plot eventually failed to fool either police or the insurer.

The 30-year-old woman, known only as L. T. N., lost everything in her failed insurance scam: her left hand and left foot, and the VND3.5 billion (US$133,929) worth of compensation she thought she could claim.

A police account released on Tuesday has left anyone who heard it speechless.

According to police in Bac Tu Liem District, at 0:05 am on May 5, they received a report about a train accident from a man named Doan Van D, 21.

The woman was taken to a local hospital, with doctors later concluding that it was impossible to reattach her lost limbs.

Following her discharge four days later, N. told Bac Tu Liem police that she had been walking along the railway in despair due to some family issues, when the train had rushed by.

Struck by the train, the woman shouted for help and was eventually saved by D., who had been standing nearby, according to her account.

However, after three months of investigation, police determined that D. and N. were acquaintances and there was no incident involving a train.

If they had succeeded, the fraud would have earned N. VND3.5 billion in compensation, according to the insurance policy she had bought earlier.

“The greatest shame is that N., instead of claiming the money, has suffered a huge loss by losing both her hand and foot,” Tung said.

“Her case sends a warning that people should not attempt insurance fraud at the expense of their own health.”

Tung said that this was the first time his unit had handled an insurance scam of this magnitude.

N. is still receiving treatment for her self-inflicted wounds.

Police are still deciding whether she should be charged for “conspiracy to steal assets.”